Jubilee - the trumpet shall sound

My recent hypothesis that the vuvuzela is becoming the protest instrument of choice for the emerging movement against austerity has received some independent confirmation. Bat020 spotted one on the demonstration outside the Conservative Party conference in Birmingham last weekend (pictured below): 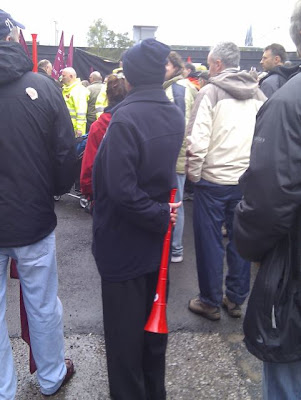 Meanwhile from Sweden, Birdseed reports that in the anti-racist mobilisations in the lead up to recent elections the vuvuzela has 'been ever present both as assertion and as sonic disturbance (of the extreme right)'.

All of this put me in mind of Peter Linebaugh's classic article 'Jubilating; or, how the Atlantic working class used the Biblical Jubilee against capitalism, with some success' first published in the journal Midnight Notes in 1990. In this text, Linebaugh looks at how the Biblical notion of Jubilee as the periodic cancellation of debt and slavery has inspired radical movements through the ages. And he notes how this is heralded by the sounding of a trumpet:

'Jubilee. Etymologically, jubilee comes from yobel, a Hebrew word meaning 'ram's horn'. Ever since, it's been associated with music, a horn, a cornet, a trumpet, and later with singing. The cornet descends from the shepherd's cornu; the trumpet and bugle from the Roman soldier's buccina; these horns are instruments of gathering and militance. In the West Indies and the South Sea Islands the spiral conch emits a very large sound. It was used by the Tritons of ancient mythology, and by the Haitian slaves on 21 August 1791 as a call to the war of liberation in the first successful slave revolt of modern history. The first thing about the jubilee, then, is that it is heard'.

Linebaugh quote from the Bible:

'You shall send the ram's horn around. You shall send it through all your land to sound a blast, and so you shall hallow the fiftieth year and proclaim liberation in the land for all its inhabitants' (Leviticus 25:9-10)

... and from the Jubilee Hymn written in 1782 by English radical Thomas Spence:

'Hark! how the trumpet's sound
Proclaim the land around The Jubilee...
Now hath the oppressor ceas'd
And all the world releas'd from misery!'

On the subject of radical Biblical references, good to see that in my old town of Luton, some people from the former Exodus Collective (famed 1990s drum'n'bass free party sound system) are still going strong, putting on regular parties as the Leviticus Collective.
Posted by Transpontine at 9:57 pm