Empire of the Senseless

In my street in New Cross last week, somebody left a pile of books outside for passers-by to help themselves to. So it came to pass that over the weekend I got round to reading Kathy Acker's 1988 novel Empire of the Senseless a mere 20 odd years after it came out (though I did read her Blood and Guts in High School back in the day). 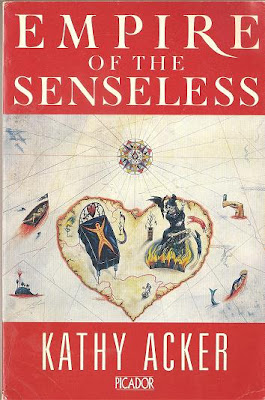 The novel is set in an alternative then-present; Reagan is US president but life is the worst aspects of that time intensified. In scenes in New York and Paris (among other places), we are shown a world of despair, addiction, disgust and violence. It is a dystopia without redemption -the interpersonal relations between characters are marked by abuse, rape and loathing. The best that its main protagonist Abhor (half woman/half robot) can achieve by the end is this realization: 'I didn't as yet know what I wanted. I now fully knew what I didn't want and what and whom I hated. That was something'.

Class war is taken for granted - at one point she describes the use of sonic weapons to kill the poor:

'In the white noise the cops arrived so that they could kill everybody. Round revolving cars emitted sonar waves. Certain sonar vibrations blinded those not in cars; other levels numbing effectively chopped off limbs; other levels caused blood to spurt out of the mouths nostrils and eyes. The buildings were pink... The cops' faces, as they killed off the poor people, as they were supposed to, were masks of human beings. And the faces of the politicians are death'.

The promises of liberty and democracy are mocked:

'These days the principal economic flow of power takes place through black-market armament and drug exchange. The trading arena, the market, is my blood. My body is open to all people: this is democratic capitalism'.

Still, it is a class war without hopeful outcome - in Paris the impoverished and oppressed Algerians stage a successful revolution, but nothing much changes, the cops still think they rule the streets.

At one point Acker seems to describe her method - an attempt to move beyond the language cut ups that she employed in her earlier work to a strategy of transgression:

'That part of our being (mentality, feeling, physicality) which is free of all control let's call our 'unconscious' Since it's free of control, it's our only defence against institutionalized meaning, institutionalized language, control, fixation, judgement, prison.

Ten years ago it seemed possible to destroy language through language: to destroy language which normalizes and controls by cutting that language. Nonsense would attack the empire-making (empirical) empire of language, the prisons of meaning. But this nonsense, since it depended on sense, simply pointed back to the normalizing institutions.

What is the language of the 'unconscious'? (If this ideal unconscious or freedom doesn't exist: pretend it does, use fiction, for the sake of survival, all of our survival.) Its primary language must be taboo, all that is forbidden. Thus, an attack on the institutions of prison via language would demand the use of a language or languages which aren't acceptable, which are forbidden. Language, on one level, constitutes a set of codes and social and historical agreements. Nonsense doesn't per se break down the codes; speaking precisely that which the codes forbid breaks the codes'.

Twenty years after this, transgression as radical strategy seems equally exhausted. Yesterday's taboos are all over the internet and the TV. Still there's no doubt that Kathy Acker's premature death in 1997 silenced a powerful and radical voice. 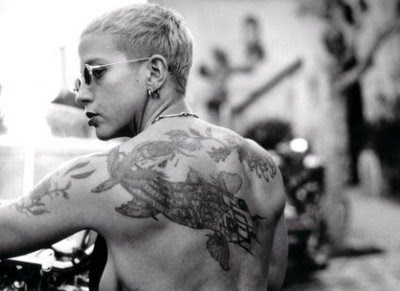 Kathy Acker (1947-1997)
- she dedicated Empire of the Senseless to her tattooist
Posted by Transpontine at 6:00 am