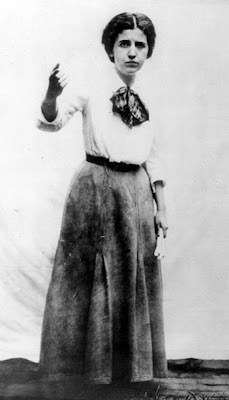 Elizabeth Gurley Flynn (1890-1964), lived to see many May Days as a key figure in the US workers movement for more than 50 years. In 1939, she looked back on some of the May Days she had taken part in, in an article called Mine Eyes Have Seen the Glory which evokes the songs and dancing on the parades:
'Thirty-three May Days have come and gone since my activities in the American labor movement began. In memory I view them – an endless procession of red banners, flying high and wide, in the eager hands of marching, cheering, singing workers. Banners of local unions and AFL central labor councils; three-starred IWW banners; banners of Amalgamated, of International Ladies Garment Workers, furriers, pioneers of unionism for the “immigrants and revolutionists"; banners of craft unions, independent unions, industrial unions, and at lone last the CIO. Many were tasseled banners, sold and black, silver and blue, with the names, numbers and places beautifully embroidered; clean, unwrinkled banners, preciously guarded in locked glass cases in dingy halls, throughout the year – liberated to fly proudly on May Day...
Where have I been on May Day? Once it was Newark, N. J. James Connolly, leader of the Irish Easter rebellion in 1916, and I spoke from an old wagon in Washington Park. He was a poor and struggling worker, sad and serious. His daughter told me how, years later in Ireland, he smiled and sang a little song Easter morning, 1916, when he went out to die for his country’s right to be free...
In 1912, I was in Lawrence and Lowell, Mass. on May Day. Textile workers, twenty-five different nationalities speaking forty-five different dialects, celebrated their victories after the fierce strikes of the preceding winter. Banners demanded the freedom of the imprisoned leaders, Ettor and Giovannitti. After the parades came the dancing, the different sorts of music – yellow-haired Northern girls dancing in raven-haired Italians – the laughter and gayety of one race trying to learn the songs, the dances of another. I can see Big Bill Haywood in the Syrian Hall in Lawrence surrounded by workers. Smoking their strange pipe, which stood on the floor, the smoke cooled through a fancy water bowl, decorated in spring flowers in honor of Bill.
May Day, 1913, was in the midst of the Paterson silk strike. Jack Reed taught the strikers many grand songs, old French revolutionary airs and English labor songs, Solidarity Forever – the Red Flag – the Carmagnole. The bosses were trying the now hackneyed “Back to work under the American flag” gag. The strikers carried high on May Day their singing retort, “We refuse to scab under the flag!"
... After that a long period of illness, when I read longingly of May Day parades and heard in memory the songs, the cheers, the music of bands and marching feet. I thought I had seen May Days, but nothing excelled in fact or memory the May Day of 1937, when I returned to New York City. Now we marched on the West Side; and the Irish bagpipes joined the music makers. Now the James Connolly Club and the unions of Irish workers paraded. I waited long to see the happy day the Irish were not all in the ranks of the police, Irish on the marching side, shamrocks, harps, Irish songs, Kevin Barry, Soldiers of Erin – Jim Connolly, I wish you were alive to see that grand sight! 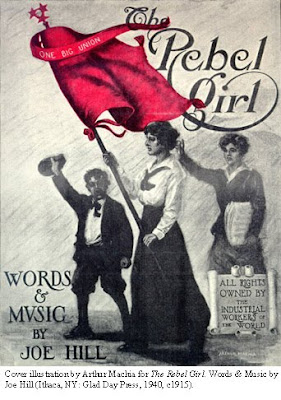 Elizabeth Gurley Flynn was the model for the Rebel Girl, celebrated in the song by Joe Hill