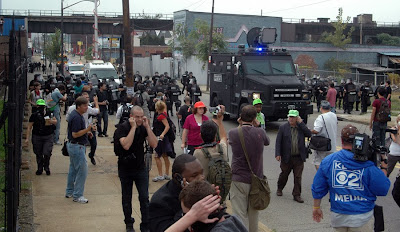 During this week's anti-capitalist protests against the G20 summit in Pittsburgh, police used a 'sonic cannon' as well as CS gas to disperse demonstrators. The Long Range Acoustic Device emits an ear-splitting siren which is extremely uncomfortable to be around. Used previously against pirates off Somalia, this is the first time it has been used against civilians in the US. It is also currently being used by the military in Honduras .

The LRAD is manufactured by American Technology Corporation (ATCO), a San Diego-based company, which has also supplied it to the Chinese police. The company calls itself "a leading innovator of commercial, government, and military directed acoustics product offers" that offers "sound solutions for the commercial, government, and military markets."

There's a CrimethInc report of the Pittsburgh protests at Infoshop news
Posted by Transpontine at 2:10 pm

I can't help thinking that this would have gone down a treat at some of the free parties of the early 1990's in the UK. All it needs is a good beat and you've got some great hardcore sounds.

Anyhow, whatever next in the Land of the Free

Yes it does seem to have a pretty fearsome sound system - perhaphs Jimmy Cauty can be persauded to buy one for a Reclaim the Streets revival. Actually the short bursts of siren sound like something Jah Shaka would use. Seriously though I believe when used in Pittsburgh they did not have it turned up to full capacity - it can cause some serious damage.

Apparently these weapons have also been used by the coup regime in Honduras against the Brazilian embassy where Zelaya has been sheltering.

Also an interesting article in recent London Review of Books about American sonic warfare - including use of heavy metal and hip hop. I'll try and find the reference.