Looking forward to next Friday's Praxis records party in London, all aboard the MS Stubnitz boat (facebook events details here) .

Praxis released its first records in November 1992, and twenty years later is still going strong. Started by Christoph Fringeli in South London, and associated in the mid-1990s with the famous Brixton Dead by Dawn parties, it is now based in Berlin. It has stayed true to its mission of putting out sounds from the noisier, faster, more experimental, but still very much partyable end of electronic music. There's a great line up next week, with various people associated with Praxis and related projects at various times:

The boat is located at King George V Dock, Gallions Reach (DLR-Station), Royal Docks, London - it is a stationary boat, so you can get on and off when you like! 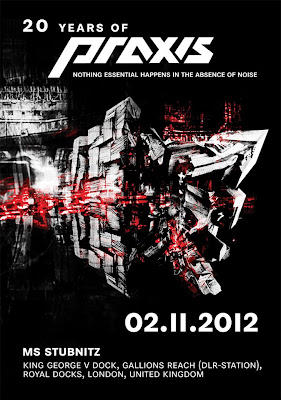 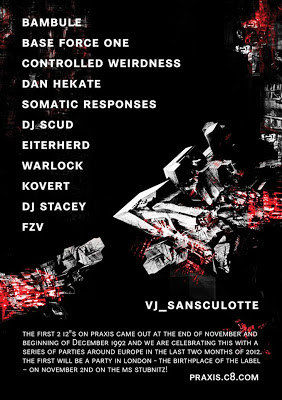 The venue itself will be worth the effort. The MS Stubnitz ﻿is a former East German deep-sea fishing vessel, converted in 1992 to a floating cultural space. It came over to London earlier this year for the ill-fated Bloc festival. In fact, as chaos and overcrowding ensued on shore, leading to the cancellation of the festival, the party on the Stubnitz went fine by all accounts, with DJ Controlled Weirdness and others holding it together. Posted by Transpontine at 8:55 pm