Music for the Middle of the Night


'The record ends. the automatic turntable lifts the needle, and the tone arm drops on to its rest. The bartender approaches the player to change records. He carefully lifts the platter and slips it into its jacket.  Then he takes out the next record, examines its surface under a light, and sets it on the turntable. He presses a button and the needle descends to the record. Faint scratching. The Duke Ellington's 'Sophisticated Lady' begins to play. Harry Carney's languorous bass clarinet performs solo. The bartender's unhurried movements give the place its own special time flow.

Maria asks the bartender, 'Don't you ever play anything but LPs?'

'But look at all the time it takes to change LPs', Mari says.

The bartender laughs. 'Look, it's the middle of the night. There won't be any trains running till morning. What's the hurry?'

Karou cautions Mari, 'Remember this fella's a little on the weird side'.

'It's true, though: time moves in its own special way in the middle of the night,' the bartender says, loudly striking a book match and lighting a cigarette, 'You can't fight it'.

... The sound of the needle tracing the record groove. The languorous, sensual music of Duke Ellington. Music for the middle of the night.' 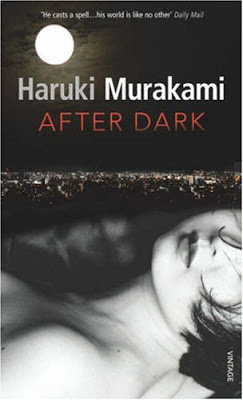 Posted by Transpontine at 8:59 am