Frightening tale from Indonesia of repression of young punks at hands of Islamists:

/Dozens of young men and women have been detained for being "punk" and disturbing the peace in Aceh, Indonesia's most devoutly Muslim province. They are being held in a remedial school, where they are undergoing "re-education". Rights groups have expressed concern after photographs emerged of the young men having their mohawks and funky hairstyles shaved off by Aceh's police.They look sullen and frightened as they are forced into a communal bath.

But Aceh's police say they are not trying to harm the youths, they are trying to protect them. The 64 punks, many of whom are from as far away as Bali or Jakarta, were picked up on Saturday night during a local concert...

Aceh police spokesman Gustav Leo says there have been complaints from residents nearby. The residents did not like the behaviour of the punks and alleged that some of them had approached locals for money. Mr Leo stressed that no-one had been charged with any crime, and there were no plans to do so. They have now been taken to a remedial school in the Seulawah Hills, about 60km (37 miles) away from the provincial capital Banda Aceh. "They will undergo a re-education so their morals will match those of other Acehnese people," says Mr Leo.

But activists say the manner in which the young people have been treated is humiliating and a violation of human rights.Aceh Human Rights Coalition chief Evi Narti Zain says the police should not have taken such harsh steps, accusing them of treating children like criminals. "They are just children, teenagers, expressing themselves," she says. "Of course there are Acehnese people who complained about them - but regardless of that, this case shouldn't have been handled like this. They were doused with cold water, and their heads were shaved - this is a human rights violation. Their dignity was abused." 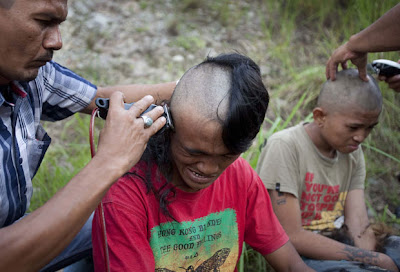 ...Aceh is one of the most devout Muslim provinces in Indonesia, and observers say it has becoming increasingly more conservative since Islamic law was implemented a few years ago' (BBC News, 14 December 2011).
Posted by Transpontine at 8:05 pm