The strike in London

I went on strike on Wednesday November 30th against changes to pensions for public sector workers - against in short having to work for longer and pay more to receive less. The goverment initially tried to play down the numbers on strike - but even by their own figures around a million were on strike, the largest number for at least  30 years. The unions suggested the number was more like 2 million.

Started to write an in-depth post about capitalism, crisis, the weakness of both the state and its oppenents etc. But that will have to wait for another day, probably another year! Instead, here's some pictures and short commentary from the strike in London - all taken on the demonstration in central London (attended by up to 50,000 people) unless otherwise stated. 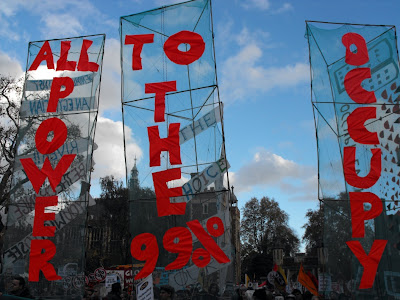 After the main demonstration, 21 people were arrested during an occupation of Panton House near Leicester Square, headquarters of  mining company Xstratahe whose CEO Mick Davies was said to be the highest compensated CEO of all the FTSE 100 companies in the last year, receiving pay and shares ot a value of £18,426,105. 37 people were also arrested in Dalston, ironically outside the CLR James Library. Seemingly they had been part of a mobile group with sound system moving between picket lines in Hackney.

See also: The Big Strike in South London for more photos and reports.
Posted by Transpontine at 9:00 am