Ko-uta is a genre of Japanese music which developed from the 19th century. It literally means 'little song' and indeed the songs tend to be short, accompanied by the shamisen (a three stringed, long necked instrument). It is most associated with the geisha, for whom learning to master the shamisen is one of the traditional arts.

There doesn't seem to be a lot about it in English, other than Liza Dalby's book 'Little songs of the Geisha: traditional Japanese Ko-Uta' (Tuttle publishing, 1979). The author trained as a geisha, and has translated some of the lyrics (she has also put out a DVD, Geisha Blues). Some of them remind me a little of the blues or Greek rembetika, songs of sensuality, longing and intoxication - albeit with more of the natural world imagery found in Japanese lyrics and poetry. 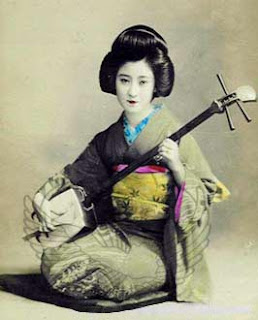 One of the songs, 'Sake to onna wa', Dalby translates as 'Wine and women'. A song associated with wandering minstrels during the late Edo period (first half of the 19th century), it could be out of the Mississipi delta:


Wine and women
Balm for the soul
This floating world is
Women and wine
Just a taste, and now
Karma leads me to this fate
Praise the lord, praise the lord!
To heaven or hell,
Women and wine,
You and me, babe
Till the end -
With a honey like you
With me in hell,
Emma and Jizo might forget
They ever renounced the world.
Oh, the demon drink

[Emma is king of the buddhist helll, Jizo is a patron deity of traveller. The last word 'onigoroshi, literally means "demon killer" and was the name of a cheap type of alcohol which was the drink of these peripatetic minstrels, not able to afford sake' (Dalby)]

I haven't found much of this music online so far - I suspect that I need to be able to search using Japanese characters which I can't read - but there are some examples at http://kouta-renmei.org/english.html.

Ichimaru (1906-1997) was a singer and geisha who developed her own style of Ko-uta singing:

Posted by Transpontine at 5:52 pm

Have you taken into account the copyright note in Daly's book that requires you to have written permission from Tuttle Publishing for digital reproduction of the song text?

The 1979 edition I had of this book predates digital reprodcution. In terms of copyright, it is to say the least debateable whether reproducing 70 words from a book for review purposes would consitute a breach.

I would hope that by mentioning this little known book (including quoting from it), and providing a link to where people can buy the DVD, I have stimulated some interest which may lead some people to buy one and/or the other. But if the author or the publisher is not happy with it, they can contact me via the email in the right hand column and I will delete this post altogether.