Thirty years ago last week, on December 16 1981, nine striking miners were killed by the state at the Wujek Coal Mine in Katowice. Three days previously martial law had been declared in Poland by General Wojciech Jaruzelski and the miners were on strike against military rule. Tanks, water cannon and then live ammunition was used in the clashes between police, troops and strikers. 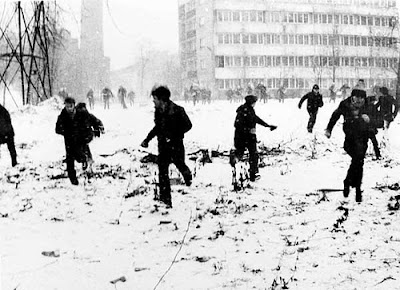 The repression successfully pacified the movement in the short term, but the memory of the massacre fired up the next big wave of strikes in 1988, and within ten years of the killings most of those responsible were out of power. Some of those directly implicated in the massacre later went to prison.

Still the collapse of the Soviet Bloc precipiated by the Polish strikers and similar movements elsewhere did not unseat all the generals, secret policeman and bureaucrats in these countries. Some just changed their badges and got on with business as usual, nowhere more so than in Kazakhstan where the former head of the local 'Communist' Party Nursultan Nazarbayev became President of the newly independent country in 1991, holding on to power ever since.

Thirty years to the day since the Wujek massacre, on December 16 2011, tanks and military forces were used in battles in Kazakh city of Zhanaozen. More than 3,000 people assembled in the city in support of oil workers who have striking and protesting since May in support of better living conditions. Police and special forces attacked the meeting and opened fire on the strikers and their families. At least 10 people are reported to have been killed.

According to this report at libcom 'the Kazakh oil field workers established a “tent city”, in Zhanaozen’s main square, in June. When police tried to break it up in July, 60 of them covered themselves with petrol and threatened to set themselves on fire. Friday’s massacre took place in the same square'.

Say what you like about Sting, but to his credit he cancelled a performance at a government-sponsored festival earlier this year in solidarity with the strikers, saying 'The Kazakh gas and oil workers and their families need our support and the spotlight of the international media on their situation in the hope of bringing about positive change'.

Other UK interests have been less choosy:

' - The companies where most of the protesting oil workers work are partly owned by Kazmunaigaz Exploration and Production, which is listed on the London stock exchange and has often raised loans from London-based institutions;
- The UK is the third largest direct investor in Kazakhstan (after the USA and China);
- Tony Blair, the former prime minister, is being paid millions of pounds to lobby in the Kazakh government’s interests. Many other British businessmen and politicians help, too. Richard Evans, the former chairman of British Aerospace, is chairman of Samruk-Kazyna, a state-owned holding company that controls a big chunk of the Kazakh economy.
- The oil produced in Kazakhstan is traded in the offices of big oil trading companies and international oil companies in their London offices'.