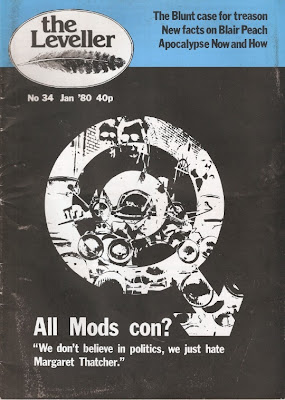 (click on images to enlarge)
In January 1980, London-based radical magazine The Leveller tried to come to terms with the mod revival that had emerged in the previous year. After the explicit social critique of the post-punk period, some saw it as a retrogade if not outright reactionary movement, as Ian Walker argues in his article here:

'The union jack, in 1979, is a fascist symbol. The red white and blue chic is the perfect accessory to the white power sticker the young lads wear on their parkas down at the Bridgehouse in the East End on a Friday night. Mod is white historical romance. It is the disco before the pollution of minorities. It is the high street before the smell of Asian food. It is instead the smell of pease pudding and the public baths where the whites come out whiter (this is the scenery of Quadrophenia). It is the land of hope and glory before the advent of feminist social workers, gay pop stars and black footballers. It is the glorious proletarian past to be recreated in the fascist vision of tomorrow. How did we trip from ripped'n torn to neat'n tidy, from punk to mod? From avant garde to retrograde, subversion to incorporation?...

We want mods to be dissidents in knife-edge creases, dredge up some anti-Thatcher quote for that cover, but really we know they are more interested in pulling power than workers' power. We want to make important-sounding statements about the corruption of street culture into consumerism, just to show we've still got all our ideological marbles (What the fuck can we do?). We dream about the council estates shaking to the rhythms of Madness and then we read the news stories about blood and glass and hospitals, the Boreham Wood mods have beaten up the Stevenage mods. We want to think the kids are alright, even if they might just now be saying they're fascists. We want to be loved by those kids, not derided as wimps and social workers (but of course we know fascism has always stressed manhood and valour). I want never gets...

The youth culture is the safety valve. Let's have surfers fighting heroin addicts in the downtown benefit disco for the astronaut asbestos mob who were ripped up by the flower power razor gangs. Let's have a permanent war of the working classes. The Glasgow experiment worked: ship the bastards out to housing projects on the dark side of town and let them kill each other, protect the law abiders with barbed wire and machine-gun emplacements. Three cheers for the classless society. Hip, hip. Grandad was a ted, Dad was a Punk, grandson is a space cowboy. But what the fuck?'. 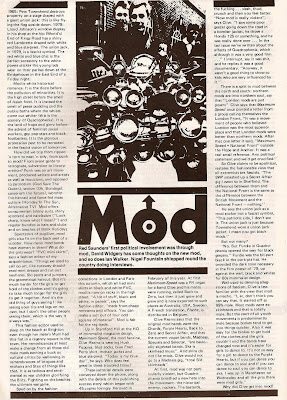 David Widgery is more ambivalent, finding the scene wanting in comparison to its predecessors: 'Ian Page [of mod revivalist band Secret Affair] is a fair trumpeter but intellectually he makes John Lydon look like Walter Benjamin'. But still 'every genuine new culture is part of a guerilla war in the entertainment industry. New Mods have elevated the originals to stylistic deities and taken the sheer elan of the Mod explosion in the era of affluence as a disguise for the new depression'. 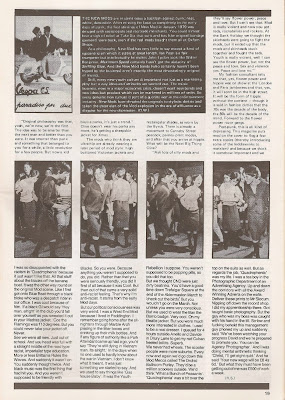 Red Saunders reflects mainly on his experience as a first wave mod in the 1960s, critical of its later representation in the 1979 film Quadrophenia:

'I was so disappointed with the racism in 'Quadrophenia' because it just wasn't like that. All that stuff about the blacks off the banana boat. It was the other way round on the original Mod scene. Like I first got onto Blue Beat through a black bloke who was a despatch rider in our office. I was cool because of him. If a black GI would say 'Hey man, alright' in the club you'd fall over yourself as you sweated it out in your Madras jacket. 'Cos the Flamingo was 110 degrees. But you could never take your jacket off. Never.

See we were all new. Just out of school. And your head was full with a straight middle of the road type racist, imperialist type education. More or less Brittania Rules the Waves. And suddenly it wasn't on. You suddenly thought twice. And black music was the first thing that had hit you. And you weren't supposed to friendly with Blacks. So you were. Because anything you weren't supposed to do, yuu did. Rather than that you were seriously friendly, you did it first of all because it was Cool. But then out of that came a very solid anti-racist feeling. That's why I'm anti-racist. It stems from the early Mod days.

But our political consciousness was very weird. I was a West End Mod because I lived in Paddington. I remember going home after the all-nighters through Marble Arch pissing In the litter boxes and drinking up their milk bottles. And if any figure of authority like a Park Attendant came up had a go, you'd say 'They're still dying in Vietnam man. Its alright.' In the days when no one used to hardly know about the war in Vietnam. I don't know what it meant. It was just something we started to say. And we used to say things like 'Gas house Baby'. It was the Youth Rebellion I suppose. You weren't supposed to be popping pills, so you did that too.

But we thought CND [Campaign for Nuclear Disarmament] were just dirty beatniks. You'd have a good time down Trafalgar Square at the end of the Aldermaston March to 'check out the birds'. But you wouldn't go on the March. Not unless you were very conscious. But we used to wear the Ban the Bomb badge. Very cool. On my Beatle jacket. But you were much more interested in clothes. I used to be a real dresser. I queued for 4 hours outside Anello and Davide in Drury Lane to get my red Cuban heeled boots. Superb. We never had wheels. The scooter people were more suburbs. Every now and again we'd go down this Mod Mecca called The Orchid Ballroom Purley. There'd be a million scooters outside. We'd think 'What a Bunch of Peasants'. 'Quadrophenia' was a bit over the top on the suits as well'. 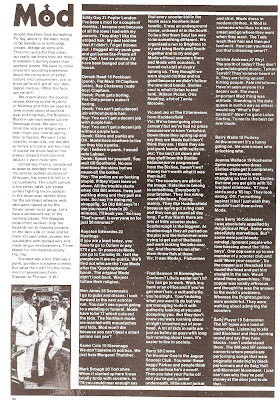 Then there’s interviews with Mods themselves. Mark, a 20 year old from Yorkshire, explains the tension between the scooterist Northern Soul fans and the fans of the new mod bands: 'When it started up here it was totally to do with scooters. In ‘76 you could near enough say every scooter kids in the North was a Northern Soul fanatic. It was an underground scene, unheard of in the South. To be a Northern Soul fan was to be something different. We organised a run to Brighton to try and bring North and South together and to try and get Mods without scooters there and Mods with scooters. It turned out a bit of rivalry sprang up. They thought we wore stupid clothes and no good because we didn’t follow the new mod bands. Sixties soul is what I listen to and funk, Wilson Picket, Otis Redding, a lot of Tamla Motown'. Vic from Huddersfield concurs: 'Down there they spring up and say they are Mods but I don’t think they are. I think they are just punk bands with suits on'.

Sally Player (19) from Edmonton discusses racism at gigs: 'The NF types are a load of hypocrites. Listening to ska and Blue beat and then turning round and say they hate blacks. I can’t understand them. The BM [British Movement] and NF [National Front] come to concerts where people are performing songs that were originally made by black performers and do Seig Heil and Movement Movement. I just can’t see why they’ve paid money at the door just to do that…'

What's being played out in these articles is an age-old tension between the strategies of 'counter culture' and 'street culture'. The former, generally but not exclusively more middle class, emphasises 'alternative' values, dropping out, critiquing 'materialism' and 'fashion' (even though there is usually just as much of a dress code as any other scene). The latter, a more proletarian dandyism, emphasises dressing up, style and working class assertiveness but is often less overtly 'political'. Still, against those who would set sub-cultures in aspic, the boundaries between these currents are always shifting. After all many of the first generation 'mods' went on to be 'hippies' and within a few months of leftists agonising about whether ex-skins turned mods in the late 1970s were the harbingers of fascism, similar people were writing excitedly about the latest mutation of that scene: 2 Tone, with its explict anti-racist sensibility.

(I don't agree with Ian Walker's stance here, but he did write some other interesting articles in that period about 'The Other Britain', some of which have been reproduced by Inveresk Street Ingrate).

That's a really strange piece by Ian Walker; sounds more like he's describing Teds or BM skins, and I'm sure he wasn't as hysterical / scathing in the article he wrote, in the same year, about skinheads (which included an interview with the YNF, funnily enough). If anything, his skinhead piece seems to harbour a grudging admiration. Also odd seeing him trying to counterbalance white violence at discos with...Madness, particularly given half of that group's audience at the time.

Having said that, the 80s mod revival really was atrocious. Crap bikes, rubbish parkas and, even though I'm not crazy about Northern Soul, I think I'd rather listen to 3 hours of that than 10 minutes of 'powerpop'...

Found a PARKA over 30 years ago hanging in the loft of the house I'd just moved into. Got the roundel painted on the back with Small Faces 66 on it and inside the lining it's got Tracey Milton Keynes Mods 1980. Can anyone lay claim to this parka ( they will have to identify some other stuff on the parka before claiming)