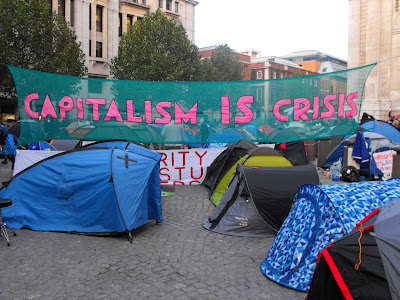 Since last Saturday's start of Occupy London Stock Exchange (Occupy LSX), I've been back a couple of times to the camp. The tent town by St Paul's Cathedral is now settled in complete with food, information and legal tents, portaloos and a library. There's a Uni tent with lectures and discussions, I gather my old comrade Massimo de Angelis spoke on Wednesday. 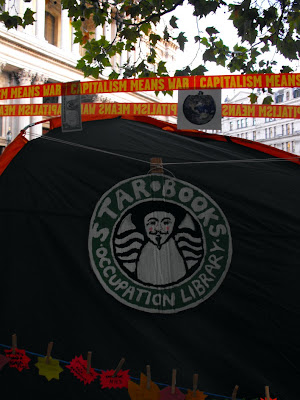 The best thing about it is probably its messthetics. Don't get me wrong, it seems very tidy, but its very existence messes up the sterile homogeneity of this part of London. You rarely see much in the way of street life other than tourists and people rushing to and from work, so it was interesting yesterday seeing all the little encounters and conversations and encoun going on around the camp with protesters and passers-by. Good too to see the walls plastered with all kinds of posters and messages. 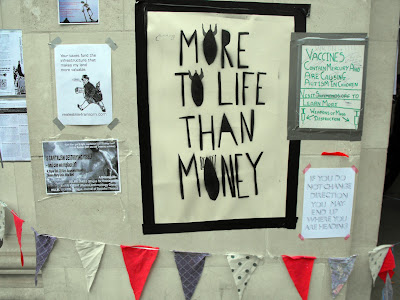 I've included quite a few images of the posters because they give a flavour of some of the different positions of people in the occupation (click on images to enlarge to read some of the posters in more detail) - anarchist, marxist, liberal, new agey etc. 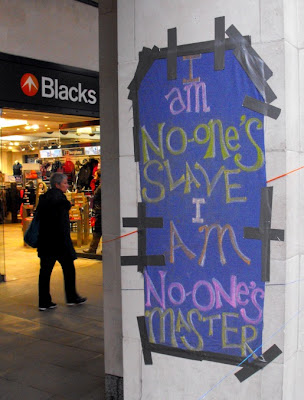 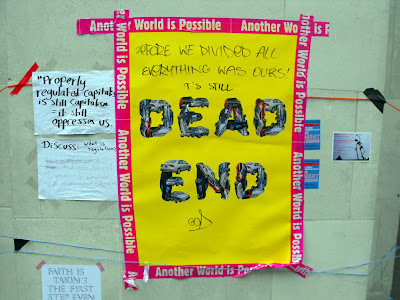 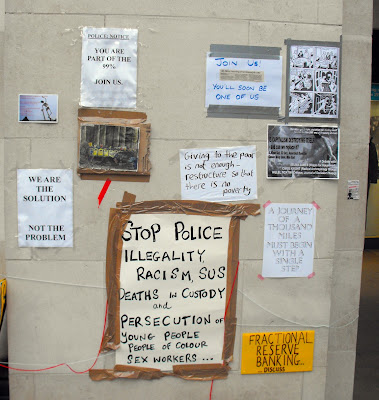 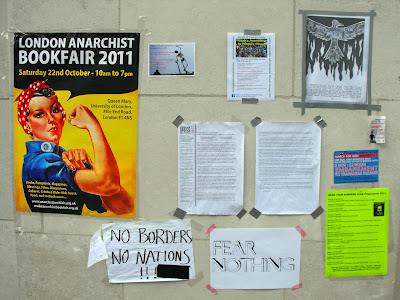 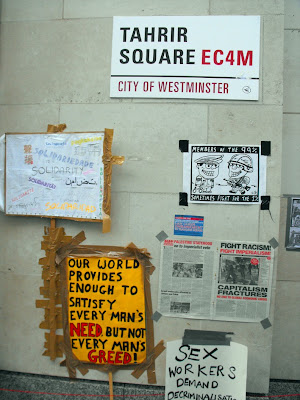 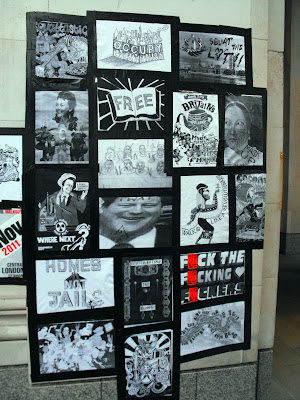 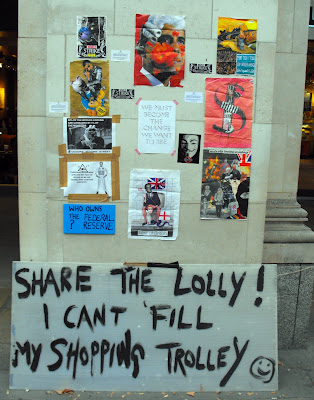 In a way, the fact that people are sleeping in the streets here represents a reclaiming of the City as a living space. The financial area of London is now largely empty of residents - it is a place to work, not to live. But until the nineteenth century it was the heart of London, filled with people of all kinds living in close proximity. The population of the City reduced from around 130,000 in 1800 to only 10,000 today, while the rest of London has expanded and become home to millions.
The camp is actually on Church land, and today the Church authorities issued a statement saying that they were having to close the cathedral for health and safety reasons because of the protest. It seems inevitable that this will be used as a pretext to seek the eviction of the camp, and the 'health and safety' has to be taken with a pinch of salt. The tents are not blocking the entrances to the church and people have been freely entering the Cathedral all week. Indeed even this afternoon, after the Church had issued its statement about closure, a service was held there for school children - so presumably it was safe enough for them.

The outcome probably reflects political tensions within the Church - on the one hand there is some support from radical Christians for the protest (and some are active within it). On the other hand, St Paul's is at the establishment end of the Church spectrum, with its 'corporate partners' including JP Morgan, Lloyds Bank and the London Stock Exchange. 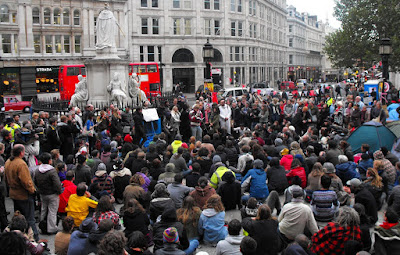 The assembly today (pictured above) vowed to continue the occupation. In a sense what is being played out repeats the medieval history of this part of London. From the 12th to the 14th century St Paul's enclosed surrounding streets with a wall and annexed them for the Church, and the citizens demanded the right to continue to assemble on the land.

According to the historian John Stowe: 'King Edward II. in the 10th of his Reign [1294], granted that the said Churchyard should be inclosed with a Wall, where it wanted, for the Murthers and Robberies that were there committed. But the Citizens then claimed the East Part of the Churchyard, to be the Place of Assembly to their Folk-motes; and that the great Steeple, there situate, was to that Use, their common Bell; which being there rung, all the Inhabitants of the City might hear, an come together. They also claimed the West Side, that they might there assemble themselves together, with the Lord of Baynards Castle, for view of their Armour, in defence of the City' (A Survey of London, 1603).

Glad to say that this week there was no sign of some of the dubious anti-semitic currents I detected at the weekend (see Occupy London: first thoughts), indeed there was singing and dancing there this week for the Jewish Simchat Torah celebrations.

Posted by Transpontine at 9:49 pm