The various Occupy actions around the world at the weekend have varied in scale, intensity and political mood. Rioting and huge crowds in Rome, a big demonstration in Madrid, and an extension of the Occupy Wall Street movement into the heart of New York, with a demonstration in Times Square.

Anti-austerity protests based on the occupation of public spaces in the heart of the city have been building for months (Puerta del Sol square in Madrid, Syntagma square in Athens, not to menton Tahrir Square in Cairo and Rothschild Boulevard in Tel Aviv). This weekend can be seen as a conscious internationalisation and that counts for something when a major trend in relation to the crisis of the global economy is a resurgence of populist nationalism. 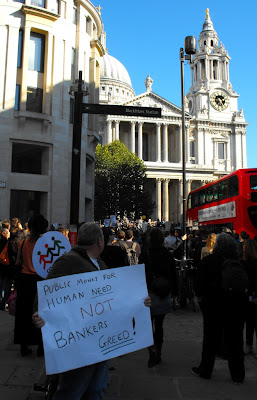 The London action was smaller than New York, Spain or Italy, but respectable in terms of numbers - I would say there were a couple of thousand but difficult to be sure, as the crowd was split up by the police cordon. Unsuprizingly, police lines prevented entrance to Paternoster Square, home of the London Stock Exchange, but the crowd did manage to occupy the steps of St Pauls Cathedral. There were some surreal scenes such as people dressed up for weddings in the church making their way through the crowd, and tourists variously frustrated and entertained. I heard one American woman complaining about the protests say that she had come here to help our economy but she wouldn't be coming back! 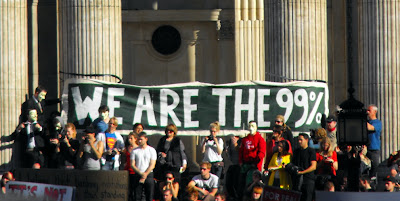 Compared to previous actions in the City, Occupy the London Stock Exchange felt a bit lacking in energy/intensity. But then again while Stop the City in the 80s and J18 in the 90s aimed to cause havoc for a day and then disperse, the Occupy movement is in for a longer haul, with many people staying there all weekend (and we shall see how much longer). So maybe some conservation of energy was in order.

There was a mix of people there, good, bad and ugly according to your taste. It would be very easy to listen to a few of the latter and dismiss the whole movement out of hand, as for instance Ian Bone does ('One Thousand Cultists Kettled at St Pauls'). But I would say that it is currently too diverse, fluid and open to give up on - there's plenty of room for discussion and development. 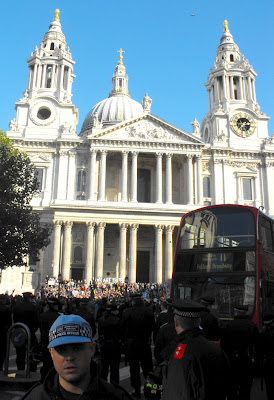 And there's certainly plenty to argue about... The adulation of some for Julian Assange, who turned up on Saturday, certainly made me feel uncomfortable, as the guy seems to have a bit of a messiah-complex combined with some incoherent politics (leaving aside the rape accusation - he hasn't been tried yet after all).

A movement without visible leaders is not one that has necessarily solved the problem of leadership, i.e. how to create direction and momentum without giving rise to a self-serving elite (whether elected or self-appointed). Without consciously tackling this issue, the lack of leaders can just mean that the 'leader's chair' still exists even if it remains empty, just waiting to be filled by the first plausible demagogue/celebrity that comes along .

Likewise a movement that disdains politics is not a movement without political assumptions. There is a fundamental shared feeling of 'enough is enough', of the refusal of austerity, and the search for an alternative to a life subject to the fluctuations of the economy. That's all good, but then what? 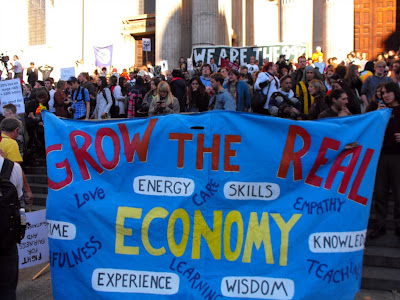 There are some odd alternative economy models around in the occupations, notions of capitalism without finance capital (the 'real economy'), of monetary reform, of a resource-based economy that is beyond capitalism and communism (this is the line of the new-agey Zeitgeist Movement who had a banner on steps of St Pauls). It is not just that some of these ideas seem to have very little understanding of what capitalism actually is and misrepresent it as a conspiracy by a few rich bankers rather than a global mode of production and exchange. It's far worse than that, because some of these ideas have very murky antecedents and indeed dubious present-day associations.

A lot of 'monetary reform' notions just read like recycled 'Social Credit' ideas, as developed before the Second World War by CH Douglas. As Derek Wall pointed out in his article Social Credit: The Ecosocialism of Fools (Capitalism Nature Socialism, September 2003), Douglas was not only an extreme right wing racist, but his monetery ideas are saturated with an anti-semitic world view. Likewise, the Zeitgeist Movement basically rehash the notorious Protocols of the Elders of Zion, simply subsituting the word 'bankers' for 'jews' (see Zeitgeist Exposed at the Third Estate).

At the Bristol occupation at the weekend this racist conspiracy theory view of capitalism was openly articulated by someobody telling the occupation that 'Zionists want a new world order'. What was disgraceful about this episode was that people dutifully repeated this poison and cheered him rather than kicking the guy out. And that whoever was responsible for 'Occupy Bristol update' on youtube thought this was uncontroversial enough to give the guy a platform.

The 'human microphone' thing in the occupations is in danger of becoming an absurd fetish. In Wall Street people repeated the phrases of speakers to make sure that people further back could hear speeches when a microphone was banned. In most cases where there is no ban it would be surely be better - and very simple - just to set up a PA or use a megaphone, like people have been for years. By the looks of the Bristol occupation, there was no need for anything as the crowd seemed small enough for everybody to hear. It did look like a religious 'call and response' exercise, and involved people in the bad faith exericse of speaking nonsense which on reflection I would hope many would prefer not to utter.

I know that there are plenty of good sound people camping out at St Pauls now, and I think it is very important to get involved and challenge reactionary ideas. To just walk away holding our noses could allow some of these dangerous ideas to get a foothold in the very high profile occupation movement.

Oh yes and this poster on Saturday really got on my tits: 'Go to work, follow fashion, watch TV, spend money, look happy, act normal, repeat after me. I am free'. Patronising activist superiority complex nonsense, looking down on the 'duped' proles. People who work, follow fashion and watch TV (I am guilty on all three counts, your honour) know when we get out of bed every morning that we are not really free, and we know when we have to spend money we haven't got what the economy is all about in a visceral way. And until we move, the 'movement' against capitalism is going nowhere. 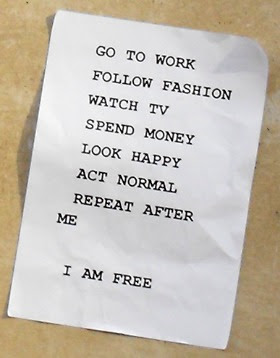 I think you are missing the point about that sign. I don't think it is an attack on those people, I think it is an attack on what this society considers as freedoms. The purpose of it is to get people to question what freedom really is. Freedom is a word that gets used a lot by politicians and we all like to think we live in a free society. But do we?