Beyond the Implode/Uncarved Anarcho-punk Podcast

Martin C. (Beyond the Implode) and John Eden (Uncarved) have put together a great if suitably chaotic anarcho-punk mix/podcast, released on You are Hear last week (download here).

The Blaggers, whose Brixton Prison anthem Jail House Doors gets an airing, were certainly punky and political but were associated with Red Action/Anti Fascist Action rather the largely pacifist anarcho-punk scene (incidentally when I lived in Brixton, the band's guitarist was in my local anti-poll tax group Tulse Hill Estate Against the Poll Tax. We were also involved in fighting against some anti-abortion zealots who tried to blockade the Brixton Hill abortion clinic, the full story of which can wait for another day).

Some interesting reflections from John and Martin on the limitations of anarcho-punk ideology, particularly the dominant strand of moralism and failure to prioritise - so that meat eaters and low paid security guards were sometimes viewed as being as much the enemy as top generals and industrialists.

Some thought too on the squatting/travelling/counter culture continuum, the 'Hidden kind of connections' flowing through the Hawkwind/Stonehenge scene through Crass/anarcho-punk and later on to techno free parties. As John Eden notes 'There are people that went through that whole thing, but obviously that doesn't fit neatly into genre-specific histories'.

One of the bands I saw most at the time was Conflict (variously at the Old Kent Road Ambulance Station, Thames Poly and the Clarendon Hotel).

Listening to Conflict's Colin Jerwood spitting out lyrics at machine gun pace on Berkshire C*nt on this mix reminded me of why I loved that band, and also put me in mind of fast chat reggae MCing or early Public Enemy. Given the lack of melody in most anarcho-punk, it makes sense in some ways to place its vocal delivery in a rap/MC continuum. As with some hip hop and reggae there's an urgency to communicate, as if those traditionally silenced in mainstream culture fear that having finally found a voice, the microphone might be snatched away again at any moment. So get the message down quick. 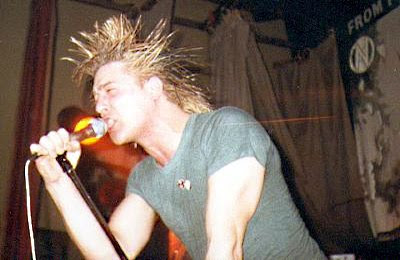 I guess we're entering similar times to the early 1980s, and there does seem to be a renewed interest in the anarcho-punk sounds of that period. Trying to simply reproduce the scene would be a political and musical dead end, but there's certainly plenty of noise and commitment to take inspiration from.

Not everybody who passed through anarcho-punk ended up as well-adjusted as myself. Check out the excellent Who Makes the Nazis? for the sad tale of John Cato of AYS, who seemingly moved from this scene to the extreme right. There's also a good new post there by Mr Eden again, this time on his time as a Death in June fan.
Posted by Transpontine at 8:54 pm

I agree Blaggers didn't identify as anarchists, but they caught on like wildfire among militant anarchos (esp after Waterloo '92) and were signed to Words of Warning, which was kind of like the Rough Trade of early 90s A-Punk - there was always a lot of support for AFA. On the flipside though, when the Blaggers signed to EMI, there followed months of rants and ravings about how they'd sold out...

Oh, and liked the Conflict / rap comparison - also check "Law and Order" (from "Increase the Pressure") - complete rap structure to that one - http://www.youtube.com/watch?v=mtwk5xs_QWo