F. Scott Fitzgerald's 1922 short story The Popular Girl is centred around the figure of Yanci Bowman and her desire for more than the life on offer to her in her mid-Western city. It starts in the ballroom of a country club on a Saturday night, where Yanci encounters her lover Scott Kimberley for the first time:

"'Ballroom', for want of a better word. It was that room, filled by day with wicker furniture, which was always connotated in the phrase 'Let's go in and dance'. It was referred to as 'inside' or 'downstairs'. It was that nameless chamber wherein occur the principal transactions of all the country clubs in America...

The orchestra trickled a light overflow of music into the pleasant green-latticed room and the two score couples who for the evening comprised the local younger set moved placidly into time with its beat. Only a few apathetic stags gathered one by one in the doorways, and to a close observer it was apparent that the scene did not attain the gayety which was its aspiration. These girls and men had known each other from childhood; and though there were marriages incipient upon the floor tonight, they were marriages of environment, of resignation, or even of boredom...
When his eyes found Yanci Bowman among the dancers he felt much younger. She was the incarnation of all in which the dance failed - graceful youth, arrogant, languid freshness and beauty that was sad and perishable as a memory in a dream. Her partner, a young man with one of those fresh red complexions ribbed with white streaks, as though he had been slapped on a cold day, did not appear to be holding her interest, and her glance fell here and there upon a group, a face, a garment, with a far away and oblivious melancholy...

Mr Kimberly suggested to Miss Bowman that they dance, to which proposal Miss Bowman dispassionately acquiesced. They mingled their arms in the gesture prevalent and stepped into time with the beat of the drum. Simultaneously it seemed to Scott that the room and the couples who danced up and down upon it converted themselves into a background behind her. The commonplace lamps, the rhythm of the music playing some paraphrase of a paraphrase, the faces of many girls, pretty, undistinguished or absurd, assumed a certain solidity as though they had grouped themselves in a retinue for Yanci's languid eyes and dancing feet.

'I've been watching you,' said Scott simply. 'You look rather bored this evening'.

'Do I?' Her dark-blue eyes exposed a borderland of fragile iris as they opened in a delicate burlesque of interest. 'How perfectly kill-ing!' she added." 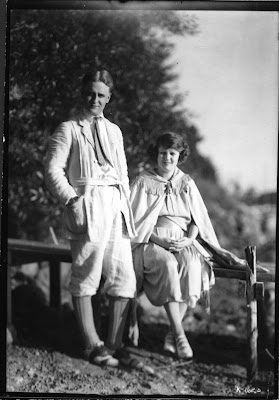