Last Saturday night's squat party in central London seems to have generated a huge amount of press interest, not all of it accurate. Scumoween was held in a multi-storey former Royal Mail parcel office in Museum Street, Holborn that has been empty for years.

There was an extensive report with pictures at the Daily Mail (sourced from Associated Press, so a bit more balanced than the average Daily Hate fare). Here's some choice extracts:

Eight Halloween revellers have been arrested after violent clashes with riot police who tried to break up an all night illegal rave. A number of officers were injured when bottles were hurled during clashes with a crowd of up to 500 youths at an abandoned former post office in central London. Police desperately battled to calm the party but most of the people went back inside the building in High Holborn and continued partying. The rave continued into the morning with deafening hard techno pumping around the surrounding streets.

Hundreds of youngsters in hooded tops - many wearing Halloween masks - crammed into the streets around the building. Police kept watch as the sun came up today and the atmosphere was friendly. Hoards of tourists have also started to flock to the scene in a bid to keep the rave going. Officers have now surrounded the eight-storey building, which is bordered by High Holborn, Museum Road and New Oxford Street, while the rave takes place.

Police were first called to High Holborn at 11.20pm yesterday. Violence was sparked when some people in the crowd became aggressive after they were asked to leave the area, police said. Bottles were hurled at officer and dozens of riot squad officers from the force's Territorial Support Group were drafted in.... 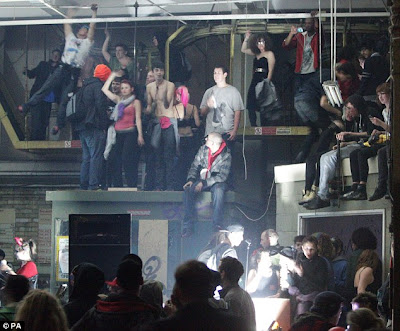 A man who said he was attacked by police during the altercation revealed bruising on his thigh. The raver, who did not want to be named, claimed: 'It was the police who were being aggressive. All we came to do here is party. They wouldn't let people in and then just started hitting people. I was on the floor and they kept on hitting me'... Ravers in boiler suits, bear suits, and jester costumes, and an array of hoodies, top hats, fluorescent caps and dreadlocks, were in the road.

Samanta Coletti and Flavia Pickler, from Brazil, tried to have their picture taken with some officers. The pair of experienced ravers were armed with earplugs, water and fake blood. Miss Coletti, 27, a waitress living in west London, said: 'We love it. We always go to squat parties, you never find fights, if someone is stealing or harassing girls they are told to leave, you can leave your bag on the floor and dance.' Miss Pickler, 28, dressed as a toffee apple with her face paint fading away, came on the train from Brighton where she works as a nanny. She said: 'It's very friendly, you can trust people.'

Inside the building space was dark. Some people were dancing while others were barely moving - raising fears that many may have used the rave to take drugs... "Inside were 10 different 'arenas' with 30 sound systems, and 200 DJs playing through the night and day", he said [one of the organisers]. He said this was the first such event in central London for nine years, adding: 'There will be a big resurgence of this sort of thing because of the economic situation. It's mirroring what happened in the last recession'.

Since then I've spoken to people who were there, and there's also been quite a bit of chat about it on various forums including Urban75 and Party Vibe.

Seems like when police first turned up there were already hundreds inside the building. They tried to stop other people getting in, but this just led to big crowds forming on the streets outside the police lines as well as traffic chaos in these West End streets. At this point things got quite heavy, the police used batons and tasers, the crowd raided a bottle bank for ammo. The police withdrew leaving some of the vehicles behind, some of which were damaged including a police van getting smashed up. If anything the Met's press office seem to have downplayed the intensity of the clashes. But it seems there were no major injuries on either side.

Then the party was left to go ahead for the rest of the night, seemingly it was a good one with loads of sound systems over several floors, including the large garage area in the basement that would once have been used for the post vans. Estimates of the crowd range from 1200 to 4000, certainly a lot more than 500. Rigs were apparently allowed to leave the area at the end without police interference.

There's an interesting range of perspectives by police who were there over at Inspector Gadget. Some fantasising about being French CRS-style tooled up riot cops able to steam in with maximum force, others noting that attempting to clear the building could have resulted in deaths. This comment is particularly telling:

'The bar has been set now – if we don’t get a heads up there is no way a response team could take on a couple of hundred determined people getting into a squat like that... Even with force mobilisation we would have had a problem clearing it, it would have been brilliant but messy, and no good news would come out of it. Back to the days of mass raves now, they’ve tried and won, and we’re now screwed'.

Some people have criticised the organisers for drawing attention to themselves by holding the party in a high profile area (e..g comment at Urban 75: ''What were they thinking...having it so central and posting the details all over the internet"). Possibly a party on an industrial estate in Hackney wouldn't have generated such interest, but equally out of site of the press, tourists and central London passers by, the police could have gone in a lot heavier.