On Monday 14th May 1984 some of us from our Miners Support Group went on the Kent miners' coaches up to Mansfield for a big demonstration. Despite being in Nottinghamshire, where many of the miners did not join the strike, there was a good atmosphere until right at the end when we were waiting to get on the coaches home. We were standing by an ice cream van when out of nowhere a police horse came charging along the pavement scattering people in all directions. Someone got knocked over and was lying on the ground - I don't think they'd even been on the demonstration. A line of police on foot followed up behind and a big group of miners and supporters formed up to confront them. Soon bottles and bricks were flying, and the police charged. The coaches back to Kent left soon afterwards, but the clashes continued. 88 people were arrested, of whom 55 were charged, some with the serious offence of riot. The police claimed that 40 of their number were injured; there were certainly plenty of casualties on our side too. 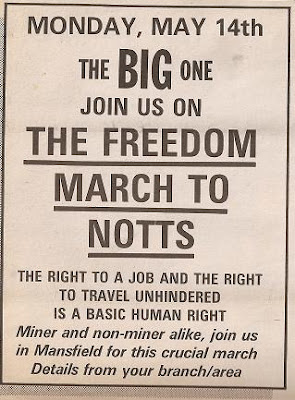 Advert for the Mansfield demonstration in The Miner, 9.5.1984

The following account of Mansfield comes from Bobby Girvan, and was published in Raphael Samuel, Barbara Bloomfield and Guy Boanas (eds.), The Enemy Within:Pit villages and the Miners Strike of 1984-5 (London: Routledge, 1986):

I think it was 14 May, it was a sunny day and we went down to Mansfield and it was a lovely carnival atmosphere if you like, it was brilliant. The thing that got me, the television cameras were there, there were a few drinks and that and singing and that. Arthur Scargill come on. We were told to get back to the buses pretty early, cos the one driving the bus wanted to go. But the thing about it was that the camera started setting up when half the people had gone and we went walking up the road towards the bus and the bus had gone and we were sitting on a grass verge and then I seen something and I couldn't believe it cos I'd had a few drinks and it was like watching one of these science fiction movies, like a dark cloud coming over the place. You just saw the police coming out of the streets from every ... you hadn't seen a policeman all day ... on horseback, they were just getting anybody. It was pandemonium!

And they were getting nearer and nearer to us and I thought, What's going to happen? Some of us went running down the road to see what the trouble was and I went to speak to this copper to see what were happening. One of them got me against the wall, another policeman grabbed him and asked him what were happening, and he says, oh he's all right this lad is. This copper went and stood with some of the women so they wouldn't get hit because they were just going mad. I see policemen get on buses, pulling people off, knocking hell out of them with sticks. As I went down the road I kept ducking and diving out of the way. I see a young schoolgirl coming round the corner with a satchel over her shoulder and a horse went flying by and knocked her flat. I went to pick her up and got kicked on the shoulder as a policeman were running past hitting people. And as I got up near the crowd there was people chucking stones and that.

I never felt so frightened or so angry in my life when I seen what I seen. You've got horses, then policemen, then people chucking bricks and from what I could see in the middle of it, three or four, probably six policemen kicking hell out of a youth of probably 17 or 18. He managed to stagger to his feet and his face was covered in blood and that and one of them ... it was like one of these African executions, he got his stick out about a yard long and whacked him across the face with it and the ambulance men was angry and was effing and blinding to the police and they had to put that young lad in an oxygen tank for about 20 minutes before they even moved him and I've never seen a sight like it. And I never thought I would pick up a brick in anger but that day I did. I was totally disgusted with what the police were doing. I'd heard things that they'd do. I'd seen one or two incidents on the picket line but never anything like that.

Soul Deep was a 1984 benefit record for Women Against Pit Closures recorded by The Council Collective - essentially The Style Council (Paul Weller and Mick Talbot) plus friends including D.C. Lee, Dizzy Hites, Junior Giscombe, Vaughn Toulouse, Leonardo Chignoli and most remarkably former Motown singer Jimmy Ruffin, whose father had been a miner in the US.

The song starts 'Getcha mining soul deep with a lesson in history, There's people fighting for their communities, Don't say their struggle does not involve you, If you're from the working class it's your struggle too. Weller criticises the TUC, bemoaning 'as for solidarity I don't see none' before concluding with a stirring chant of 'Strike Back, Fight Back, Let's Change That, No Pit Stops, No Closures, We want the truth, we want exposure NOW!'

According to John Reed's biography, Paul Weller: My Ever Changing Moods (2005), Paul Weller delayed the release after a taxi driver driving strike breakers in Wales was killed by a concrete block dropped on his car from a bridge. Weller donated some of the royalties to the taxi driver's family as well as to the strikers.

The B-side of the record was called A Miner's Point - an interview with two miners undertaken by Paolo Hewitt (you can download the interview here).

Hi mate,
i was one of the mansfield 55, over twenty of us in a small cell in hucknall police station, charged with riot and afray, yep i was worried, i did grab a police inspector around the neck because he had me mate by his neck, however as two coppers grabed me i went quite and spent over 48hrs locked up, i saw a lot of abuse of power over the 12 months.
power to the people.
mark w

Good to hear from you Mark. The other thing I remember about it was that it was a hot day, along the route of the march we stopped off at pubs for liquid refreshment.

Yes Baz, it was a striking miner from Staffordshire that did it. The police were itching for trouble and as the march and rally had been a good humoured peaceful day they were frustrated that they were given no reason to start any. Their frustration finally got the better of them outside the Dial pub in the market place. The police just started to wade into anyone drinking there (many were nothing to do with the Rally) knocking pint pots out of their hands then telling them to drink up as their drinks fell to the floor. This in turn caused angry words to be exchanged as tempers were raised. The ones who had attended the Rally started to walk back towards Chesterfield Road to get their buses home along with a few local striking miners. Some of the police were kicking peoples heels as they were walking along and trying to goad them. Just across the road from the Evans Halshaw garage on Chesterfield Road, the bait was taken, the crowd turned on their tormenters and a few police were attacked and knocked to the floor. This gave the police there the opportunity they wanted, and they steamed into anyone there, lashing out with their truncheons and cracking heads. But some of the marchers there, were made of sterner stuff and they stood their ground. A pitched battle then ensued with casualties on both sides. The fighting, in between short lulls must have gone on for an hour or more. Some of the local striking miners were still fighting running battles with the police a long time after the buses had left. The 55 charged with riot were aquitted, not one policeman was charged with any offence after all the brutality they had dished out.