On the side of the dancers, the dirt and the dust

'Order reigns in Tehran!' You stupid henchmen! Your 'order' is built on sand. Tomorrow the revolution will already 'raise itself with a rattle' and announce with fanfare, to your terror:I was, I am, I shall be!" (OK so in the original Rosa Luxemburg quote it's Berlin rather than Tehran, but the sentiments still apply)

The repression continues in Iran, but so too does resistance. What started out as a protest about the election results has turned into a more fundamental challenge to the Islamic Republic.

The (officially) defeated election candidate Mousavi has blood on his hands just like the (officially) victorious Ahmadinejad. He was Prime Minister in the 1980s at a time of executions of political prisoners and the butchery of the Iran-Iraq war. But the protests on the streets have drawn on a wider resentment against religious repression and economic hardship - both of which have got worse over the past couple of years, as Azadeh Moaveni observes

Late that summer [2007], authorities launched a full-scale campaign of intimidation against young people they accused of un-Islamic appearance. Within a few short weeks, police detained 150,000 people, and all the women in my life went out to buy the shapeless, long coats that we had worn back in the late 1990s. Though the campaign targeted young men as well, authorities singled out women with particular brutality... To add to Iranians' frustration, interminable queues accompanied the government's petrol-rationing scheme, unveiled that summer. In the evenings it could take several hours to fill our car, and when our local petrol station was torched by rioters furious with the new plan, we stopped using the car. Iran's streets began to remind me of postwar Baghdad. Censorship had been stepped up such that seventh editions of sociology textbooks were not receiving permits to reprint. The ominous white morality police vans that patrolled the streets kept young people in a permanent state of anxiety. One morning, while taking my baby for a stroll near the mountains, a teenage policewoman grabbed by arm and tried to lead me to a police van. "Your sleeves are too short," she barked'.

In the turmoil leading up to the election, there was some space created, at least for some: '“We were singing, dancing in the streets, boys and girls together. We had never done this before. No one wanted to go home'. Things are clearly now much more sombre, but determined:

'I will participate in the demonstrations tomorrow. Maybe they will turn violent. Maybe I will be one of the people who is going to get killed. I’m listening to all my favourite music. I even want to dance to a few songs. I always wanted to have very narrow eyebrows. Yes, maybe I will go to the salon before I go tomorrow! There are a few great movie scenes that I also have to see. I should drop by the library, too. It’s worth to read the poems of Forough and Shamloo again... I’m two units away from getting my bachelors degree but who cares about that. My mind is very chaotic. I wrote these random sentences for the next generation so they know we were not just emotional and under peer pressure. So they know that we did everything we could to create a better future for them' .

Ahmadinejad meanwhile has denounced his opponents as 'dirt and dust' and of 'officially recognising thieves, homosexuals and scumbags'. 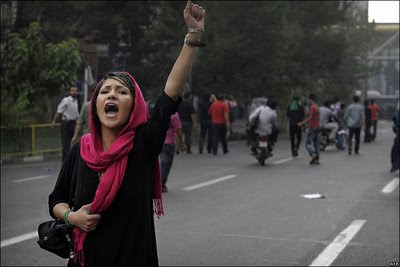 The movement cannot be dismissed as just a few middle class students caught up in a faction fight within the Iranian state (a view I have head expressed at a meeting in London last week). Interestingly, Khodro Auto Workers staged a slow down in support of the demonstrators last week. Similarly the Syndicate of Workers of Tehran and Suburbs Vahed Bus Company have endorsed the protests, despite their opposition to all of the state-picked candidates in the election. There have also been protests by hospital workers at the Rasul Akram hsospital in Tehran.

On the music front, a number of songs have already appeared dedicated to Neda Aghan Soltan, shot dead by state forces last week, here's just one of them:

Mohammad Reza Shajarian, one of Iran's most famous singers, has written to the state broadcaster IRIB demanding that they stop playing his songs. 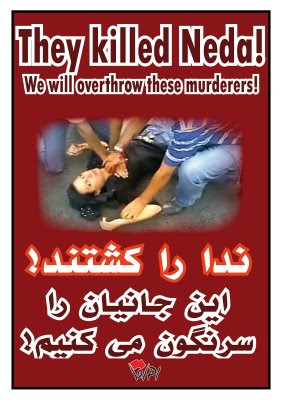