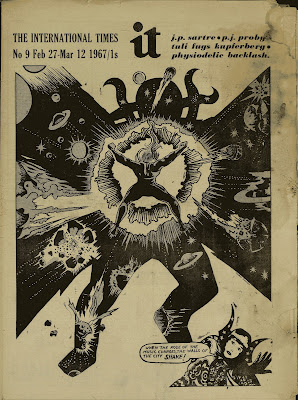 There's a fantastic archive up now for The International Times, the famous UK underground paper of the 1960s and 70s. It includes scans of every single page, and is free text searchable. I know I'm going to be trawling through this for months to come.

The cover above is from no.9, Feb-March 1967, and seems to show somebody being blown away by some cosmic force with the speech bubble saying 'When the mode of the music changes, the walls of the city shake' (a quote from Plato beloved of Jacques Attali).

Inside this issue there's an article on some hostile reportage of the scene, including a great quote from an article by one Michael Vestey in a publication called London Look: 'London isn't swinging any more, its raving mad. At least when scenes like this can happen in the name of 'freedom of expression.' Usually these raves are harmless. But "happenings" like this — pictured last week at the Round House, the'cultural' centre in Chalk Farm — are shocking. Before children, designer Mike Lesser stripped naked and rolled sensually in coloured jelly. Overall, from the lighting effects and the awful sounds created by the groups, the atmosphere is oppressively psychedelic, creating the feeling that one is intoxicated by LSD without actually having taken it." Apparently the journalist in question had been asking questions like 'Do you have public sexual intercourse at your raves?' only to be told that 'the Round House was too cold'.
Posted by Transpontine at 11:01 pm