Even though I stand by my critique of last month's T-Mobile pseudo-flashmob, the advert may have had the effect of amplifying the real silent rave phenomenon, judging by last night's events in London:
'Liverpool Street Station was overrun by dancers who had congregated on the concourse for a silent disco, organised via the social networking website. The crowd, who were all listening to music through headphones, broke into dance at 7pm on Friday night in a scene which aped the advert which was filmed at the station last month. The flash mob caused police to close the station for around 90 minutes due to fears of overcrowding. Participants, some of whom had travelled hundreds of miles to take part, said the station was so packed that there was no room to dance. Some revellers climbed on top of a ticket office to perform their routines, while others climbed notice boards and other station furniture... Word of the the event, called Liverpool Street Station Silent Dance, was circulated on the internet through Facebook. 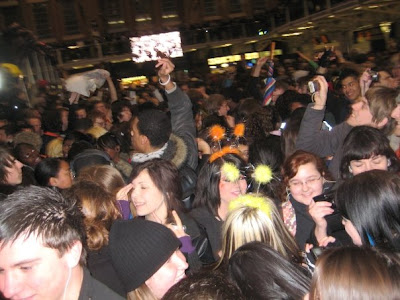 Jennie Tuck, 16, a student from London, said: "It was an amazing atmosphere. Everyone assembled underneath the departures board and watched the clocks for a 10 second countdown to seven o'clock. When the clock struck seven, everyone went mad. People were dancing and screaming and jumping up and down. One guy completely stripped off and loads of others were crowd surfing." 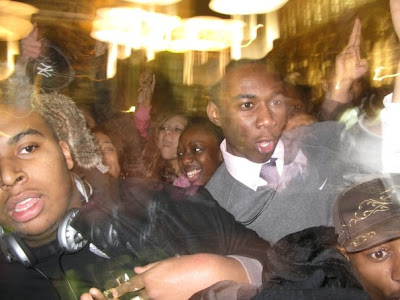 A City of London Police spokeswoman, who was on the scene said: "We had to close the station because it was completely overcrowded. There were around 12,000 people here" (source: Telegraph, 7 February 2009).
On Facebook, people already seem to be planning a similar event in Trafalgar Square next Friday 13th February at 7 pm. What we really need is somebody to turn up with a sound system on a truck to really take this to another level.
Posted by Transpontine at 2:08 pm