How do social classes come about? From a Marxist point of view, class is defined by people's relationship to the means of production - there are those who own (or who own substantial share holdings in) banks, factories, land and various large companies, the 'independently' wealthy who don't rely on a wage to survive. Then there are the mass of the population without reserves, who can only make a living by selling their labour. In this perspective, the middle class doesn't really exist - as most middle class people are also only a couple of pay cheques away from the same destitution as the rest of the proletariat.

But I digress. The point I want to make is that the objective economic conditions for classes are only part of the story - as the radical historian E.P. Thompson argued in his The Making of the English Working Class, for classes to become social actors with a particular world view, acting in their perceived interests, a cultural process has to happen in which people develop common ways of socialising, thinking and acting. For Thompson, class is not just about "so many men who stand in a certain relation to the means of production" and class formation "is a fact of political and cultural, as much as of economic, history".

So where does dancing fit in with this? With a nod to Jurgen Habermas, Geoff Eley extended Thompson's idea to talk of "a working class public sphere", a self-conscious independent culture with its own publications and diverse organisational forms. He argued that in addition to formal political meetings, there emerged in the nineteenth century "new forms of collective sociability" that created "a distinct public space of independent working-class activity". Dancing was part of this, with Eley identifying the tea parties and balls of the Chartist movement as examples of this collective sociability.

But dance aspects of the public sphere are not specific to the working class. Anyone who has read Jane Austen knows how important balls were in the early industrial period as a means for the wealthier members of society to meet, interact and ultimately marry and reproduce. Over time they were one mechanism by which landed aristocrats and new money bourgeoisie came to form a new dominant class (or rather for an existing dominant class to accommodate newcomers). 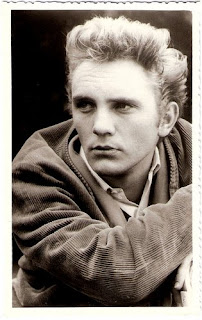 Something similar happened in the 1960s, as the doors of the ruling class opened to admit new moneyed stars from the media and entertainment industries. Once again dancing - this time in 'Swinging London' nightclubs - facilitated this. Terence Stamp (left) a working class boy turned actor who benefited from this recalled: 'In the sixties, amongst ourselves, our age group, there was an absolute coming together. And what made the coming to­gether was basically music and dancing. In a way it was a new aristoc­racy. But the main thing was that there was suddenly access between the classes. Had the sixties not happened, I would never have been able to spend the night with a young countess because I would never have met her. And as the great Mike Caine once said to me, 'You can't shag any­one you don't meet.'"

Of course social mobility between classes is not to be confused with classlessness - the former implies the continued existence of classes, just with the potential for a few to move up and down the ladder. As Shawn Levy has written of that era: ''As the sixties emerged, proponents of the the­ory of classlessness could point to the likes of Quant and Stamp and the Beatles and a dozen other exceptions- people who'd broken into a new class where talent and the wealth that followed success mattered more than who your parents were. But it was inarguably the case that this mer­itocracy- with its members-only restaurants and nightclubs -was just as exclusive as the old upper class of money and birthright; you may no longer have needed to be born to position but earning it was, arguably, a harder and rarer feat. And, too, entrance to the new world only lasted as long as the traditional elite chose to allow it. "The rich people let us play in their back garden for a few years," said tailor Doug Hayward, "and then they said, 'Right, lads, very nice, you've all had a good time, now let's get back to it".'

Thank for the post, it made me think of this scene from the Leopard of Visconti when the old count dances with the young daughter of the "nouveau riche". (http://www.youtube.com/watch?v=7nWmnygnn2g)

Although I cannot say I specially agree with you. Dancing (along with other socialising occasions such as the salons, promenades, taverns, etc.) is not some sort of flicking social ladder that the new elites can solely climb at some rare moments in history.

These ladders are always there one way or the other and they are not limited to the new elites. There are enough examples of middle class or even poor beautiful young women marrying way above their original social status to convince any one. For instance Madame Du Barry became the king of France Louis XV's mistress and was made countess in the process despite her rather popular origins.

As Gregory Clark's Farwell to Alms has shown recently, the communication between classes was so fluid that it is quite meaningless now to talk in terms of classes at least in the way Marxist historians tend to do.

Nice one! But, and as Ben notes the ladders are always there, but I also find it interesting the way the working class can come up is through popular entertainment and sport, but it is much much harder in other areas - for example literature. In publishing you might be a bestseller but you'll never be let in if you are working class and haven't had that modified via an Oxbridge style education. Look at someone like John King (Football Factory etc.). The worst thing from their point of view in the UK is to be working class, unreconstructed (i.e. no bourgeois re-education) and come from around London. If the reformist scum at the Labour Party were serious about their equality programmes then they'd shut down Oxford and Cambridge Universities, which completely perpetrating this system... But it us acting as a class who'll have to close them down, although abolishing money and nation states is clearly more of a priority and the end of the Oxbridge system will follow from that... but we'll have a good boogie while we're at it!

Sometimes these are just fleeting encounters - the wealthy youth slumming it at an inner city nightclub, the proles blagging their way into the ball. Sometimes they result in a permanent change in an individual's social status (Cinderella marries the Prince). But it also seems true to me that social mobility varies at different historical periods - there is certainly evidence that it has declined in the UK since the 1960s.