I enjoyed the Lovebox fesival in East London's Victoria Park on Sunday, food, fair rides, sunshine and all, but most of all some excellent music. We started off with the wonderful Rachel Unthank and the Winterset's Northumbrian folk, particularly impressive were Blue Bleezin’ Blind Drunk and a cover of Robert Wyatt's Sea Song - the latter sung by Rachel's sister Becky who shares singing duties in the band. I prepared to cringe when they announced that one number would feature the sisters clog dancing but in fact it added an impressively energetic percussive dimension.

If this band demonstrated the simple power of a piano, fiddle and human feet and voices, over on the main stage the headliners took a less minimalist approach - with both Goldfrapp and Flaming Lips demonstrating the power of massed dancers, props and costumes.

Goldfrapp's recent Seventh Tree album marked a turn to a folk-tinged electronica so naturally the stage had to be filled with Wicker Man-esque singers and dancers in white dresses and flowers in their hair, not to mention women in bikinis and wolf masks dancing round a pole topped by antlers! The tempo quickened up as the set progressed through some of their pacier recent material (such as Happiness and Caravan Girl) and onto earlier anthems like Ooh La La and Strict Machine. 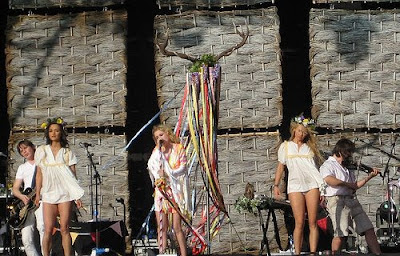 The Flaming Lips followed with a stage invasion of men dressed as superheroes and women in pink hooded robes, while cannons fired confetti and lead singer Wayne Coyne rolled over the crowd in a transparent plastic bubble. Then on to one of their anthems, Race for The Prize - follow that. I love this band, they come across as a spectacular cartoon but wrapped up inside are very poignant songs of loss and hope. I have already declared to my family that I want Do You Realize played at my funeral but that would be unfair as everyone would burst into tears, even if they didn't like me. I had a tear in my eye on Sunday when singing along to to Yoshimi Battles the Pink Robots which in my mind is about a young woman battling cancer (though there is debate online about whether this is the intentional meaning). 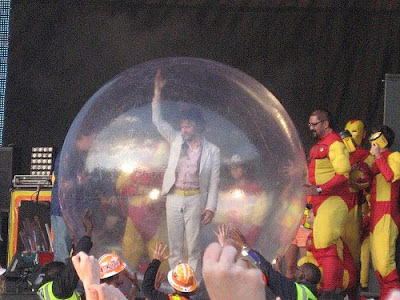 I didn't get round to checking out all the dance tents, but I enjoyed dancing to some pumping house music in the stockade, a circular enclosure defined by wooden poles with a disco ball hanging from a plane tree. The vibe reminded me of the crowd at the Good Times and Sancho Panza sound systems at Notting Hill Carnival. 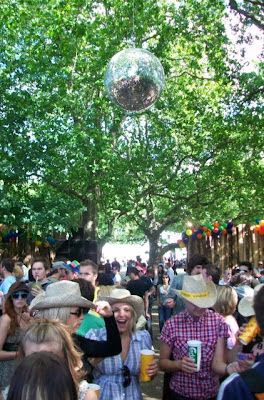