More songs about flowers and owls

'There's something in this valley... it's owls and flowers, and it's dangerous'
(Alan Garner, The Owl Service)

'there was a new sound, very close, broken by the water, but he could hear it, and it went on and on - a voice, humming, mumbling, scarcely words, but it was a kind of song''
'It was almost a chant. "Come, apple-sweet murmurer; come, harp of my gladness;
come, summer, come."' (Alan Garner, The Owl Service) 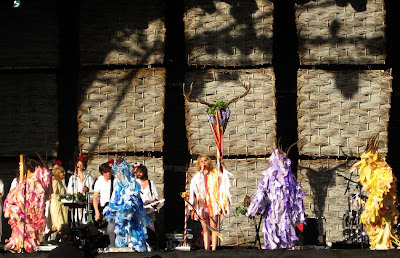 As I mentioned in the previous post, when Goldfrapp played at last week's Lovebox festival the stage set included a pagan lite smorgasbord of wolf masks, antlers and dancing maidens. At one point, a group of dancers in brightly coloured feathery costumes entered the fray - apparently owls.
The most recent Goldfrapp album - Seventh Tree - includes owl imagery aplenty on its cover - with a photo of Alison Goldfrapp in a kind of owl costume and a drawing by her of an owl/woman. 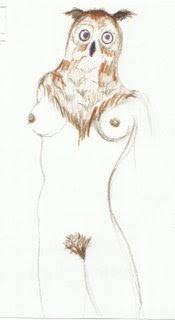 Simon Reynolds has previously picked up on this and the link to the fantastic (in every sense) The Owl Service, a 1967 novel for children by Alan Garner.
I think there may also be another source - The White Goddess by Robert Graves, in which he reconstructs/imagines a Celtic 'Tree Alphabet'. According to Graves, in this alphabet 'The seventh tree is the oak'.
Like Garner in the Owl Service, Graves draws on the Welsh folk story of Blodeuwedd, a woman magically created from flowers who is later turned into an owl.

For both Garner and Graves, she is a flower/owl goddess with both creative and destructive aspects. For Graves too she is a form of the White Goddess, the poet's muse and source of truth: 'The poet is in love with the White Goddess, with Truth: his heart breaks with longing for her. She is the Flower-goddess Olwen or Blodeuwedd; but she is also Blodeuwedd the Owl, lamp-eyed, hooting dismally, with her foul nest in the hollow of a dead tree'. 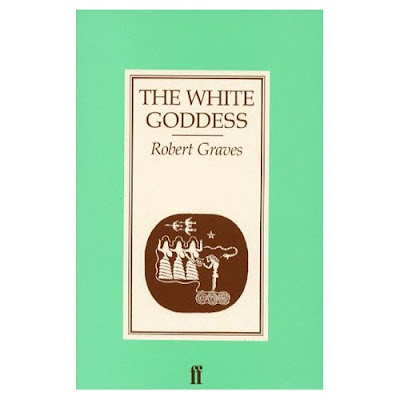 Graves also links owls to the Greek myth of the Sirens, enticing sailors to their deaths with their songs: 'Their wings were perhaps owl-wings, since Hesychius mentions a variety of owl called the Siren'.

The Owl Service, and the film The Wicker Man, both embody a recurring urban fantasy: that the British countryside, particularly its Celtic regions, is the home to secret pagan cults surviving from the pre-Christian era (see also Peter Ackroyd's Dorset novel First Light).

The content of these imagined cults is usually a heady brew of sex and the kind of fertility sacrifice James Frazer wrote of in his enormously influential The Golden Bough (first published in 1890). Robert Graves' description of an orgiastic pagan ritual gives a sense of the mixture of fascination/revulsion/titillation wrapped up with this fantasy: 'No poet can hope to understand the nature of poetry unless he has had a vision of the Naked King crucified to the lopped oak, and watched the dancers, red-eyed from the acrid smoke of the sacrificial fires, stamping out the measure of the dance, their bodies bent uncouthly forward, with a monotonous chant of 'Kill! kill! kill!' and 'Blood! Blood! Blood!''
All of this is grist to the mill of much weird folk. Unlike the earlier folk revivals, there is little concern with the suspect notion of the authentic music of the folk. Instead there is more of an interest in folklore (and its contemporary cinematic retellings) as a repository of strange and uncanny images, myths and stories.
Goldfrapp have sourced their visual aesthetic from this pool more than the lyrical/musical content of their songs, although a track like Little Bird with its striking imagery of a crow 'with mouths for eyes' would sit along the slightly spookier sounds of Joanna Newsom or Bat for Lashes. But bats - as opposed to owls - that's a whole other post....
'She was tall. Her long hair fell to her waist, framing in gold her pale and lovely face. Her eyes were blue. She wore a loose gown of white cambric, embroidered with living green stems of broom and meadowsweet, and a wreath of green oak leaves in her hair'
(Alan Garner, The Owl Service)
Posted by Transpontine at 6:28 pm