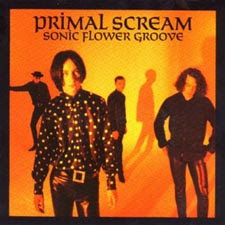 Bob from Brockley has alerted to me Primal Scream's cover version of Hawkwind's Urban Guerrilla, to which they have added the lyric 'I'm a suicide bomber'. The story of my adolescent fixation on Hawkwind and the anarcho-trance-rock-underground can wait for another post, but what of the Primals?

I must be one of the few people who think that Primal Scream were at their fey/faux psychedelic peak in their C86 indie pop incarnation ('Gentle Tuesday' etc.). Not long after I saw them at the Leadmill in Sheffield in their 'Ivy Ivy' phase - they had reinvented themselves as leather jacketed rockists and it was terrible. Remarkably, thanks to Andy Weatherall, acid house, and ecstasy, they made one of the greatest albums of the 1990s, Screamadelica. Soon though they were reverting to that authenticity fixation and ever since they have functioned, in the UK musical imagination at least, as a kind of talisman of the 'real thing', a late 20th/early 21st century rerun of The Rolling Stones - complete with vague gestures of rebellion, guitars, more guitars, and (yawn) much-hyped drug habits. A kind of vicarious lifestyle of arrested development for the consumption of Loaded laddists who never grew up.

I retain a residual fondness for Bobby Gillespie, like me his dad was a Scottish socialist/trade unionist, but I'm afraid that sometimes his political gestures are as cliched and clumsy as his rockist image. The suicide bomber chic of their version of Urban Guerrillla is in line with Gillespie's 'Make Israel History' comments a couple of years ago - his solidarity with Palestinians might be commendable but does he really want to line up with the suicide bombing 'sweep the jews into the sea' tendency? I don't suppose he does, but a kind of uncritical rhetorical extremism can be as addictive (and damaging) as heroin and guitar solos.

Bring back the Sonic Flower Groove!
Posted by Transpontine at 10:42 pm

I'm with you on this, Transpontine - (though Velocity Girl was the one that did it for me originally) Screamadelica is a great album like you say, but I'm not too bothered about much else they've done.

And perhaps Bobby should leave the politics to someone sensible like Mani ...

I was at the Primal Scream gig which Andy Weatherall reviewed for the Melody Maker or NME (can't remember which) and obviously saw something in them that led to Screamadelica. My memory of that night - it was in the Primals' first rockist phase, post-JAMC - was of lots of 16-year-old indie kid girls in jumble sale 60s dresses queuing up at Bobby Gillespie's changing room door, coming back swooning saying "Bobby kissed my belly".

Anyway, I totally agree on the brilliance of Screamadelica and on the exceptional-ness of it in their generally boring guitar-rock career. Down with rockism!!
http://brockley.blogspot.com/2008/05/against-rockism.html

I also agree with you, of course, on Bobby's dodgy politics. Didn't know about the Make Israel History precedent.