Clubbing in Kings Cross - end of the line 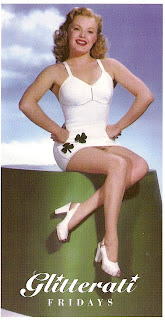 The beginning of this month saw the final closure of three clubs in the old Goods Yard by Kings Cross station in north London - The Cross, Canvas (formerly Bagleys) and The Key. For the past 15 years this zone of old warehouses and railway arches was one of the key areas for London clubbing, attracting up to 4,500 people between them in any one night, but in an area being massively redeveloped it was never going to last.

My first visit was there in March 1995 for Glitterati at The Cross, a glammed-up house night with Danny Rampling DJing (flyer pictured). The Cross had a small terrace with palm trees and seats from fairground rides. On that night it did indeed feel very glamorous, no mean feat for a couple of railway arches, but I guess that was down to the crowd.

The glamour had worn off by the time I went back the following year for a Renaissance night, perhaps because Renaissance had built up such a hype about the incredibly luxury of their events. My diary of Saturday 20th January 1996 records "First the highlights. The bloke passing round a bottle of champagne on the dancefloor at 2 am... the (German?) women who said to me'Luuuuvvly shirrrt oooh from Hyper Hyper!.. The people from Dublin who took our picture''. On the negative, there was the door policy: "two blokes in front were turned away because one had steel toe caps; so did one of our party but the bouncers didn’t even look at this boots. Was it because he had pink trousers on... perhaps, though my pink hair wasn't a problem. In fact I was only asked one question - how many of you are there, and how many are girls?". The night was billed “The Italian Renaissance” on account of Italy’s Alex Neri being on the promised DJ line up along with Boy George and Ian Ossia. It was £15 in and the famous Renaissance decor consisted of "a couple of polystyrene cherubs, a tatty cross and some red material".

Bagley's was much more messy, definitely more like a rave than a club. My main memory of it is going there for me and my partner's joint stag-hen do in June 1997. The night was Freedom (which ran from 1996 to 2001), based on the premise of having different kinds of music playing rather than a single style. I wrote at the time 'Bagley’s is a huge place with at least four big rooms playing a range of music from garage to techno. Unfortunately this meant that at any one time about half the people there were wandering from place to place looking for something better (with little joy in my case). Although the place was busy, there wasn’t much of an atmosphere, and it all felt a bit grim. The venue itself felt like a squat party without the imagination. There were no hangings or interesting decor, just a few sad trees in one room. One of the few things in its favour was that there was plenty of fresh air, with access to an open air terrace outside. I’m sure on a starry summer night it would be great, but it was too wet to appreciate'. Not one of my best nights then, but I know other people had some great times there.

It is the nature of club spaces that they come and go, but there are broader questions about what happens in a city when the marginal, semi-derelict zones where nightlife flourishes are replaced by the bright shining surfaces of redevelopment. There are apparently plans for new clubs in the area, but another chapter in the history of dancing in London has definitely come to an end.

Do you have any good Kings Cross stories? Post in comments.
Posted by Transpontine at 6:57 pm