Richard from Commie Curmudgeon and Rough in Here... has taken issue with some of my earlier pro-disco posts, suggesting that I have exaggerated its utopian dimensions. He says:

'I was just a young teenager when disco had its heyday in NYC with Studio 54, not even of drinking age during most of that time, but I have a pretty clear memory of some things as an outside observer, such as the overblown elitism involved in that venture and much of the disco scene. Studio 54 was famous for having a door policy, something that didn't really exist in the punk scene until the Mudd Club and Danceteria (which policy I always disliked), and Studio 54 widely advertised the idea that you could get on their long line to participate in this big competition to prove you were glamorous or chic enough to get in. It was probably their biggest selling point.

Disco may have promoted a sort of liberation for oppressed identity groups, and it may have inverted the usual standing of some of these groups in society, but the disco scene, especially as manifested at '54, enforced a class elitism and system of hierarchical selection all its own. The argument that this movement was so utopian because it was run by women and gays could be countered with the argument that a woman also got elected to run the British government in the late '70s, and look how egalitarian she turned out to be.

If disco had these great liberating qualities for identity groups, it featured and promoted some pretty regressive attitudes as well. One might add that disco was characterized by a complete retreat from the overtly radical or even liberal politics of so much popular music (especially black dance music, if I recall correctly) in the '60s and early '70s. Disco had good qualities too, which were carried over into techno and a lot of related dance music in later years (which would take another, very long comment to spell out), but if my memory serves me correctly, calling it an egalitarian utopia is a bit of a stretch'. 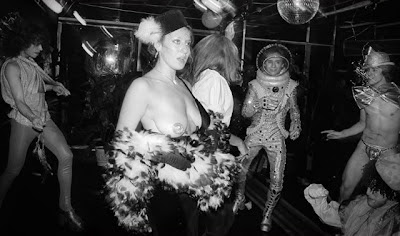 Today I went to an exhibition in London of photographs of 'New York's Nightlife in the 1970s' by Allan Tannenbaum (example left). The exhibition at The Draywalk Gallery, off Brick Lane, was promoted by Deep Disco Culture and if indeed it was truly a representation of 70s disco culture I would have to agree that Richard was right. Many of the photos were of Studio 54, and while some of the scenes looked liked fun, there was clearly an emphasis on wealth and celebrity and more than a whiff of 'fuck the proles' upper class decadence.

But from all I have read and heard, I do not believe that disco can be reduced to Studio 54 and similar scenes. Tim Lawrence is one of many who have persuasively argued that the origins of disco were quite distinct from its later manifestation. In an article entitled In Defence of Disco (again) (New Formations, Summer 2006) he puts forward the following account:

'The disco that riled the gathering forces of the New Right was born in cauldron conditions. Lacking alternative social outlets, gay men and women of colour, along with new social movement sympathisers, gathered in abandoned loft spaces (the Loft, the Tenth Floor, Gallery) and off-the-beaten-track discotheques (the Sanctuary, the Continental Baths, Limelight) in zones such as NoHo and Hell's Kitchen, New York, to develop a uniquely affective community that combined sensation and sociality. Developing a model of diversity and inclusivity, participants established the practice of dancing throughout the night to the disorienting strains of heavily percussive music in the amorphous spaces of the darkened dance floor'.

The subsequent opening of Studio 54 in April 1977 as 'the glitziest and most exclusionary venue of the disco era.... steamrollered the ethical model of the downtown party network into smithereens... Whereas the dance floor was previously experienced as a space of sonic dominance, in which the sound system underpinned a dynamic of integration, experimentation and release, at Studio this became secondary to the theatre of a hierarchical door policy that was organised around exclusion and humiliation, as well as a brightly-lit dance floor that prioritised looking above listening, and separation above submersion... Whereas the dance floor had previously functioned as an aural space of communal participation and abandon, it was now reconceived as a visually-driven space of straight seduction and couples dancing, in which participants were focused on the their own space and , potentially, the celebrity who might be dancing within their vicinity'.

In disco the lyrical content was rarely political in the way some rock and soul was, as Richard identifies, but this can only be seen as a retreat if we judge music solely by what it says. A negative critique that explicitly refuses to affirm the way things are is one part of any radical social movement, and this is something that we find for instance, in some punk - essentially the sound of saying NO. But movements also need to be constitutive, that is to develop new more liberatory relationships between people involved. The latter was the contribution of the best disco dance floors, 'generating and spawning a model of potentially radical sociality' (Lawrence) quite different from the audience at traditional gigs, a contribution that has been played out in different dance music scenes ever since.
Posted by Transpontine at 6:41 pm

why use studio 54 as your example? because it is one of the most well known? does that make it representative of disco?

I think the whole point of my post was to critique the notion that Studion 54 was representative, but it is the one that everybody writes about.