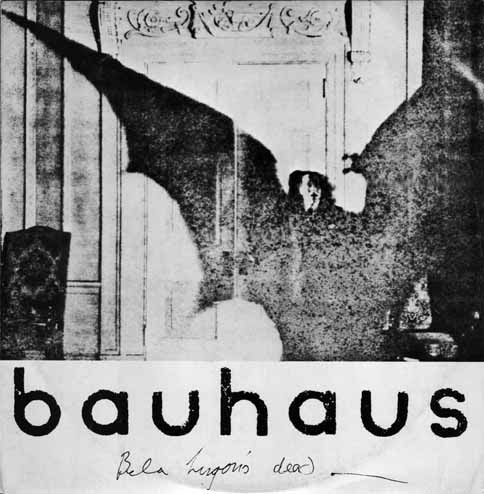 Popped into People’s Republic of Disco in Brixton for a little while last night, couldn’t stay for the messy mash up that was just getting going when we had to leave but spent some time listening to the music leaping across genres with, for instance, Burial’s South London Boroughs being followed shortly afterwards by Surfin’ Bird and I was made for lovin' you baby by Kiss. Thing is that’s exactly how my brain works, which is how the following occurred to me...

Has anybody else noticed that the bassline on Burial’s glorious dubstep anthem Archangel sounds remarkably like that on Bauhaus’s 1979 proto-goth classic Bela Lugosi’s Dead? The similarity doesn’t stop with the bassline either, the Bauhaus track has a very dubby feel, lots of space and reverb.

Lets’s take this flight of fancy a step further. Was the real origin of dubstep not South London in the last few years, but Northampton (home of Bauhaus) in the late 1970s? And what of Burial’s famed anonymity – could this be a ruse to disguise the fact that he is none other than Bauhaus’s Pete Murphy or maybe Daniel Ash?

Anyway I have spliced together a couple of samples from Archangel/Bela Lugosi so you can decide for yourself:
Bauhaus and Burial: samples from Bela Lugosi/Archangel (MP3)

Another point, if Burial’s Untrue is to dubstep what Goldie’s Timeless was to drum’n’bass in 1995, the crossover album that gets reviewed in the broadsheets etc., isn’t it interesting that both feature a key track referencing celestial beings – Archangel in the first case, Angel in the latter? Is there something about this ethereal aesthetic that smooths the way for acceptance more readily than say urban Londonism? A question rather than a criticism, I love both these tracks. Mind you I also love Bela Lugosi's Dead.
Posted by Transpontine at 5:26 pm

its the sound of music which has allowed it to crossover., not the name which appear a bit whimsical to me. the style which references a past music and is generally 'warm'is not dissimilar to portishead and tricky which has already been accepted by the media. but anyway, burial is not representive of dubstep at all really...

Yeah not suggesting the name is critical, just interested in the parallels - Burial is not representative of dubstep but nor was Goldie of d'n'b, both moving beyond genre limits to paint on a bigger canvas, both also perhaps moving in a more humanistic direction with that warmer style you mention.