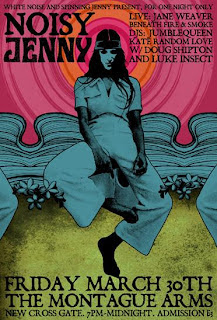 The Montague Arms in New Cross on a Friday, a night jointly presented by White Noise (linked to Battered Ornaments records) and Spinning Jenny. On the stage, Pete Hedley of Beneath Smoke and Fire is singing accompanying himself on a fiddle. The sound is not so much Seth Lakeman, but something more spectral. There are echoes and noises off, bursts of electronic beats underpinning the haunting melodies.

Folk music has always been concerned with ghosts and spookiness, and not just in the form of supernatural ballads like Tamlin or the Elfin Knight. Since Cecil Sharp began collecting songs in the early 20th century and defining a specific ‘folk music’ in opposition to other popular musics, folk revivals have invoked the spirits of gypsies, agricultural workers and miners against the evils of modernity or capitalism, depending on political perspective.
The difference between the various current folkisms (twisted, neo, acid, psychedelic, folktronica etc) and the earlier ‘traditional folk’ revivals is that the latter were only unconsciously hauntological. The ideology of authenticity disguised the fact the old songs were not simply a direct testimony from the past but were being reframed and understood according to contemporary needs. For instance the need to believe in an unbroken oral transmission of song led to a downplaying of the historic role of literacy and printed sources such as ‘broadside ballads’ (something well documented by more thoughtful revivalists such as A.L. Lloyd). Like all ghosts, ‘folk songs’ are neither of the past or the present but partake of both – central to the meaning of Hauntology as coined by Derrida, and more lately applied to music by Simon Reynolds, K-Punk and Bethan Cole.

The music promoted at clubs like White Noise might occupy a similar sonic territory to traditional folk music (give or take electronic treatments) but the aesthetic is less concerned with authenticity than with the past as a slightly spooky storehouse of half remembered melodies and uncanny phrases.

Jane Weaver's softly sung moments of beauty on the same night remind us of another thread of current acoustic musics. There is a fey element (cf Joanna Newsom) but this is not fey in the sense of vaguely ‘girly’ and lacking in presence. This is fey in its original meaning, as in like the fairies, but not fairies in their diminutive Victorian chocolate box version. In older fairy tales, the Good People might have been beautiful and alluring, but were also powerful and not to be messed with. Tales like the Legend of Knockgrafton, in which a man who responds correctly to the enchanting songs of the fairies is rewarded by being cured of his disability, while another who responds rudely has his troubles doubled. Similarly behind some of the fey melodies of folk old and new lie sentiments of passion, jealousy, murder and bewitching. This is feycore.

With its stuffed animal heads, bones and maritime bric a brac, the Montague Arms is the perfect setting for a club like this (more Battered Ornaments than you can shake a stick at). Over the past few years, many an art punk hopeful has played in this pub (and indeed art punk originals The Gang of Four played their first gig in 20 years here). That a folk-tinged club can draw a respectable crowd here is perhaps a healthy sign of diversification away from a more or less exclusive musical palate of boys and guitars.
Next White Noise is on April 27th, 'a monthly South London gathering with Doug Shipton (Finders Keepers/Delay 68/Battered Ornaments) and Luke Insect (The Laughing Windows) pulling strings left, righ tand centre to deliver some of the best in off-kilter independent music as well as a host of firebrand guest DJs spinning a mixed bag of soft psych, acidik folk, radiophonic anomalies and fuzz-ridden-break-heavy psychedelic platters of yesteryear on the last Friday of every month'.
Posted by Transpontine at 6:19 pm

(The latter I would say is hauntological in its channelling of Dolly Collins, one of the great forgotten geniuses of weird folk...)

I responded to this post on my 'Surreal Documents' blog, http://surrealdocuments.blogspot.com/.