Reclaim the Future in London 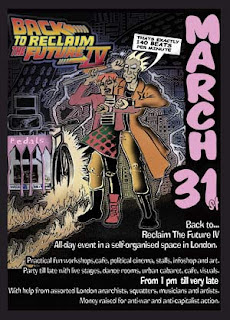 A Reclaim the Future event went ahead in a squatted building in North London's Holloway Road last weekend, with various radical workshops from No Borders and others in the daytime and a party with sound systems later on.

However, several people were arrested as riot police sealed off the road and prevented people (including some of the bands due to play) from getting into the venue -even though hundreds were already partying inside.

Further reports at Wombles and Indymedia
Posted by Transpontine at 5:24 pm