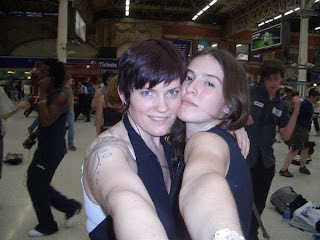 From the London Evening Standard, 5 April 2007:

More than 4,000 clubbers danced through the rush hour at Victoria station in Britain's biggest flash mob stunt. Revellers responded to e-bulletins urging them to "dance like you've never danced before" at 6.53pm.
There were knowing looks and giggles among the casually dressed crowd that gathered from 6.30pm, wearing earphones. A deafening 10-second countdown startled station staff and commuters before the concourse erupted in whoops and cheers. MP3 players and iPods emerged and the crowd danced wildly to their soundtracks in silence - for two hours.
University of London student Lucy Dent, 20, was among the flash mobbers. She said: "It was my first flash mob and I'm hooked. I've been dancing non-stop since we began. I didn't even notice the commuters. When you get into the dancing you're oblivious to them and forget you're at a railway station."
Chris Gale, 39, brought his daughter Sophia, three, and son Jacob, six. Mr Gale, a property entrepreneur from Bromley, said: "The children were a bit bewildered at first but then had fantastic fun. Some of the commuters are only interested in their trains and had to weave round us to the platforms. But most of them stood and stared, finding it hugely entertaining - and some even joined in. I saw the straightestlooking guy in a suit with his briefcase doing the freakiest dance moves."
Last night's flash mob ended when four vanloads of police dispersed the dancers. The event was staged by clubbing website mobileclubbing. Invitation emails and texts went out a week in advance. One commuter failed to see the funny side: "I was trying to get my train home but the whole concourse was filled with students dancing and I couldn't get through. The last thing I wanted after a hard day at work was to miss my train because of the idiots."
Flash mobs, groups of people brought together via the internet who perform a bizarre act together before disappearing, took off in America in 2003.
Photo of dancers in Victoria Station from http://www.myspace.com/mobileclubbing
Posted by Transpontine at 11:14 pm