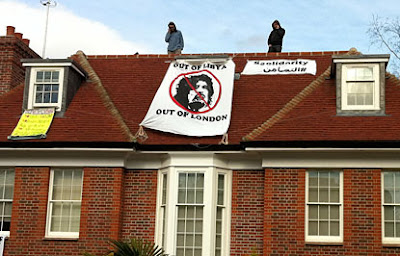 Great to hear tonight of the occupation of the mansion in Hampstead, north London, belonging to Saif Gaddafi - son of the hopefully soon to be late Colonel. 'Topple the Tyrants' have squatted the place and put up banners including one with a picture of Gaddafi saying 'Out of London, Out of Libya'.

Put me in mind of an earlier occupation, the squatting of the abandoned Libyan People's Bureau(an Embassy building), initiated by people around anarcho-punk prankster band God Told Me To Do It in 1986. There's a nice account of the squatting of the place - and expropriation of its contents - by Anna Marrian at Animal Farm:

'We secure the door and explore the building, staying away from the windows. It’s four floors of 30-foot ceilings, ballroom sized rooms with plush carpeting and heavy velvet curtains, mahogany desks, button-backed leather sofas and office equipment stacked up in the end of each room. A shroud of dust everywhere... I get everyone from the St. John’s Street squat and drive back to the Libyan People’s Bureau intact. It’s dark and the side street is deserted. Andy and the others disappear inside and reappear thirty minutes later carrying one of the green leather sofas out the back door. This is followed by several photocopiers, curtains, fax machines, telex machines, leather executive office chairs, handfuls of books written in Arabic. The van is stuffed to the ceiling'.

Also came across this account: 'It had been vacant after someone inside the embassy fired on a group of demonstrators and killed a policewoman. After that, the whole staff refused to cooperate in any investigation and returned to Libya, leaving the building vacant. Enter squatters. I went to one of their parties. I remember one skinhead girl trying to balance as many copies as possible of Quadaffi's Little Green Book on her head'. 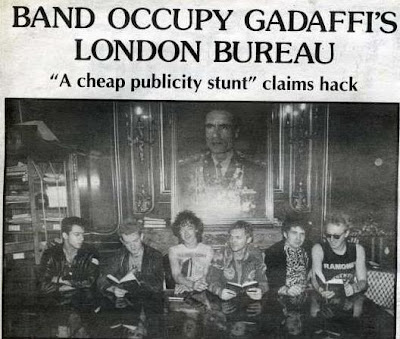 Of course in those days, Libya was a pariah state following the shooting dead of PC Yvonne Fletcher in 1984, as Embassy staff opened fire on anti-Gaddafi demonstrators in London. Since then, without any change in regime, Gaddafi has acquired quite a fan club - shaking hands with Tony Blair and his son Saif feted at the London School of Economics and by the British Royal Family. Everybody from Anthony Giddens (social democratic theorist of the Third Way), the National Front (current BNP leader Nick Griffin travelled to Tripoli in 1986), the Workers Revolutionary Party and the Nation of Islam have sung his praises. Was there ever a dictator with such a disparate group of supporters from far right to far left via every shade of mainstream governmental opinion?

No part of the political spectrum seems to have been immune from this nonsense. In the early 1990s I took part in the International Infoshop gathering in London, bringing together people involved in radical social centres and book shops from across Europe. The event was hosted by two London infoshops, the 56a Infoshop at Elephant and Castle (which still exists) and the 121 Centre in Brixton's Railton Road (which was evicited in 1999).

Those of us at the London end were mostly from a broadly anarchist background of hostility to all states. We seemed to have plenty in common with the comrades from Germany and Scandinavia with their focus on housing struggles (squatting), militant anti-fascism and autonomous movements. However when it came to talking about stuff outside of Europe it was a different story. We were horrified when the proposal was put forward that we should take part in an 'anti-imperialist solidarity camp' in Libya to show our support for the Gadaffi regime's stand against the US and Europe!

Amongst parts of the 'anti-impi' autonomist left this kind of support for all kinds of dubious regimes and stalinist 'liberation movement' rackets was commonplace - seemingly in Europe, autonomy and new forms of emancipatory politics was on the agenda, the rest of the world could make do with personality cults and militarist dictatorships.
Posted by Transpontine at 8:26 pm

OK - I admit it, I was (vaguely) pro-Gaddaffi in some senses. Constant demonisation from the west in the 80s, Reagan's gratuitous bombing, the dubiousness of the Lockerbie trial, his noises about pan-Africanism, and slick (sorry!) way of keeping a lot of Lybian oil nationalised made me reluctant to paint him as the crazed dictator of mainstream media. I thought he was as 'crazy' as Castro - someone backed into a corner who held it together with a compromise of ruthlessness, principle and realpolitik.

I admit it - I was very, very naive. But he's one of those figures where it can be very hard to find a trusted 'source'; except in situations like the one at the moment.

It's partly the old my enemy's enemy sydrome, never a good guide to action in my view. But also double standards - most of his admirers wouldn't actually want to live somewhere where the self-appointed head of state ruled by personal whim for forty years, regardless of how enlightened his policies might or might not have been.

Maybe that's why after the London International Infoshops Meeting there was never another one again in Europe! It was certainly a clash of political cultures between them and us although there were also some really great people there too. I remember also arranging for them to meet various folks engaged in London struggles, they were more interested in their own interminable navel-gazing discussions and shunned the people were invited down to the 121 Centre!

Anonymous said...
This comment has been removed by a blog administrator.
9:43 pm

On February 16, 2009, Gaddafi took a step further and called on Libyans to back his proposal to dismantle the government and to distribute the oil wealth directly to the 5 million inhabitants of the country.
However, his plan to deliver oil revenues directly to the Libyan people met opposition by senior officials who could lose their jobs due to a parallel plan by Gaddafi to rid the state of corruption.
Some officials, including Prime Minister Al-Baghdadi, Ali Al-Mahmoudi and Farhat Omar Bin Guida, of the Central Bank, told Gaddafi that the measure could harm the country’s economy in the long term due to “capital flight.”
“Do not be afraid to directly redistribute the oil money and create fairer governance structures that respond to people’s interests,” Gaddafi said in a Popular Committee.
The Popular Committees are the backbone of Libya. Through them citizens are represented at the district level.
“The Administration has failed and the state’s economy has failed. Enough is enough. The solution is for the Libyan people to directly receive oil revenues and decide what to do with them,” Gaddafi said in a speech broadcast on state television. To this end, the Libyan leader urged a radical reform of government bureaucracy.
Despite this, senior Libyan government officials voted to delay Gaddafi’s plans. Only 64 ministers from a total of 468 Popular Committee members voted for the measure. There were 251 who saw the measures as positive, but chose to delay their implementation.
Given the rejection of the Committee, Gaddafi affirmed before a public meeting: “My dream during all these years was to give the power and wealth directly to the people.”
So…another big LIE falls by the wayside, the false image of Ghaddafi the dictator who robs from his people.
http://redantliberationarmy.wordpress.com/2011/03/27/reason-for-war-gaddafi-wanted-to-nationalise-oil/