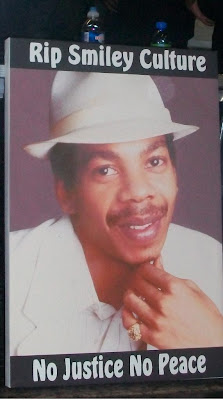 An electrifying event at Lambeth Town Hall tonight, the first public meeting of the Campaign for Justice for Smiley Culture. By 7 o'clock, when the meeting started, the hall was packed. The 300+ seats were all filled, and the sides and back full of people standing. Many more people were outside the hall unable to get in - no idea of the crowd size but it was more than 500. As it was only last week that the great reggae MC died during a police search of his house, the turn out was particularly impressive. The meeting was chaired by Lee Jasper, joined on the platform by the speakers and members of Smiley Culture/David Emmanuel's family, including his brother, son and daughter. After a minute's silence Bishop John Francis of Ruach Ministries launched the proceedings with the statement that 'Smiley's blood is crying out for justice' (incidentally Francis is a man with a musical history himself, as a member of the Inspirational Choir which sang on Madness's Wings of a Dove among many other things). 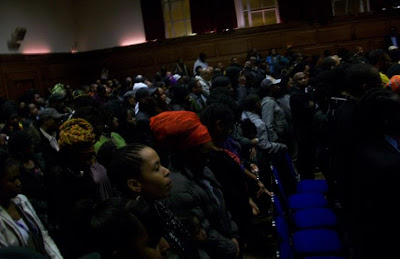 Mike Franklin of the Independent Police Complaints Commission, who is overseeing the investigation, outlined the current state of play. He confirmed that the only witnesses were four Metropolitan Police Officers with no independent witnesses at all. His claim that the most sophisticated resources would be available for the investigation was met with a cry of 'Lie detector' from the floor, which got a huge cheer. Franklin has some local credibility as a former black community activist, so was received politely if not with enthusiasm. Later a speaker from the United Friends and Families Campaign, which has supported other families of people who have died in custody, denounced the IPCC for helping the police cover up. Merlin Emmanuel, Smiley Culture's nephew, gave a powerful speech. Without speculating on exactly what happened last week, he was clear that David Emmanuel would be alive today if police hadn't searched his house, and if, having raided the house they had followed their own guidelines of keeping the person secure while they carried out the search. Like most of the speakers, he was clear that this wasn't an isolated incident but formed part of a pattern of racism and injustice. He mentioned the Brixton uprising and the New Cross Fire of thirty years ago, and described his own family's experience of moving from Brixton to Thamesmead at the time of the murders in that part of London of Rolan Adams (in 1991) and Stephen Lawrence. He offered his condolences to the family of Iain Tomlinson, killed by police on the G20 protest in 2009 - 'The people of South London and the wider community stand with you in solidarity' - and mentioned that around 400 people have died in police custody in last 10 years. He confirmed that a demonstration was planned on April 16th from Wandsworth Rd (where David Emmanuel grew up in Stockwell) to Scotland Yard police headquarters and proclaimed that 'Unity is free and by far the most potent weapon we have at our disposal'. 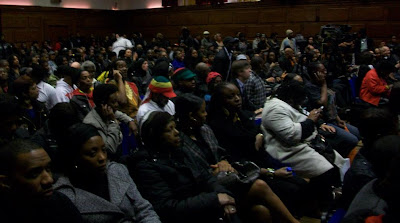 Asher Senator, Smiley Culture's orginal lyrics partner and like him a Saxon Sound System MC, recalled that their first photo interview, with Black Echoes magazine, had actually taken place in the very building where the meeting was held tonight. He mentioned that a couple of Smiley Culture tribute tracks were already being recorded, one a song written by Maxi Priest with possible guest singers, the other a track called Smiley Culture's Character Reference which he recorded last night at Commander B's studio. He performed some of that tonight and it was amazing, weaving his own lyrics and memories around some of Smiley Culture's lyrics from tracks like Cockney Translation, Police Officer and Slam Bam. It got a desrvedly good response, with people banging the wooden panels of the meeting room. 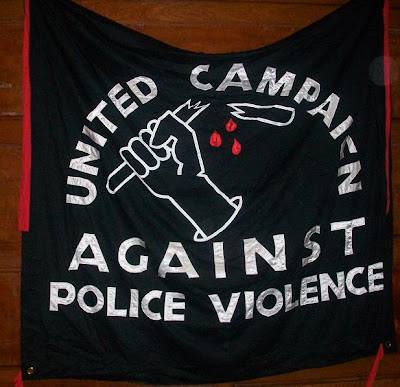 There was an emotional speech from the mother of Wayne Hamilton, found dead in a canal in Sheffield last year after being chased by police. Many other families have suffered like David Emmanuel's family are suffering now, the difference is this time the dead man is known throughout the world. This is one death the police and the IPCC aren't going to be able to sweep under the carpet.