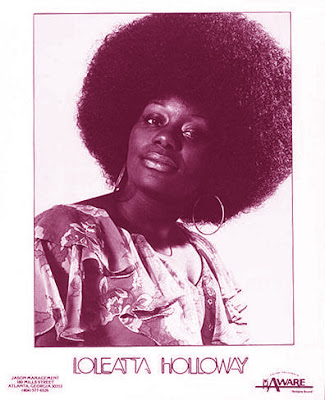 Disco legend Loleatta Holloway died last night at the age of 64. For me, her best tracks were on the great Salsoul label in the 1970s, including Hit and Run, Catch me on the Rebound and my personal favourite Runaway (put out under the name Salsoul Orchestra featuring Loleatta Holloway)

Ironically her voice is probably best known to UK listeners via a track she wasn't even credited with singing on. In 1989, Ride on Time was a massive number one hit for italian piano-house producers Black Box. The track was built around vocal samples from Loleatta Holloway's Love Sensation, but Holloway was unaware of this until she heard it. She took legal action and managed to secure a share of the income.

It has been suggested that Black Box themselves were unaware of the origin of the vocal:

'It is also worth noting that Black Box were just as surprized as Holloway was to find out who actually sang the vocal. The vocal track was in all likelihood lifted from an unlabelled bootleg of a capella mixes on the album 'DJ Essentials Inc. Acappella Anonymous Volume 1' which included more than a dozen instrument-free vocals, among them Loleatta Holloway's 'Love Sensation'. A careful listen to a number of songs around the same period - including German-based duo Snap's UK Number One 'The Power' which features an ad lib from Jocelyn Brown's 1986 single 'Love's Gonna Get You', and Manchester's Happy Mondays' 'Hallelujah', which uses samples from The Southroad Connection's 'In the Mornin' - reveals that the vocals were all taken from this very same album' (Tony Bennett, Rock and popular music: politics, policies, institutions, 1993).

I do find it hard to believe that discophile producers could have been totally unaware of Loleatta Holloway, and to add insult to injury they used a model to mime the vocals in the video. But notwithstanding that, the affair raised some interesting questions in those early days of sampling. On the one hand, sampling seemed to offer a limitless horizon in which the whole of recorded culture was up for grabs. I defended the right of KLF to rip off samples from Abba and others in the same period on the basis that they were subversively detourning popular culture. On the other hand it was notable that sampling was reproducing the earlier pattern of popular musics, whereby mainly white record companies, producers and artists got rich on the backs of the unrewarded and unrecognised creativity and labour of black singers and musicians. In this respect, sampling was just the new face in the ongoing plunder of black musical cultures.

Still Loleatta Holloway made sure she (belatedly) got her dues, and did ultimately benefit from the exposure. As Matthew Collin recalls in his book Altered State: The Story of Ecstasy Culture and Acid House, she was paid to perform at some of the massive acid house raves of the late 1980s, notably in October 1989 at a Helter Skelter party attended by 4,000 people in 'a muddy, ploughed field in Oxfordshire. The incongruity was sweet, seeing these dance music icons climbing up a rickety ladder onto the back of a flat-bed lorry - in open farmland! - to sing and play. There was Loleatta Holloway, the lead singer on scores of classic Salsoul disco anthems, who seemed almost scared of the mob of brightly-coloured lunatics thrashing in front of the stage'. Ce Ce Rogers and KLF also played.

See also Ben Beaumont Thomas in The Guardian: 'Holloway's voice, however, full of strident indignation and volcanic sexuality, is always the dominant force in her songs, going toe to toe with even the most pounding pianos and lushest orchestras. But the key to her appeal is that she doesn't push herself too far to the front. The pleasure of listening to divas like Whitney or Rihanna is that it's an aspirational experience – women want to be them, men want to be with them. Holloway is a different proposition: a collective experience, of mutual understanding and shared joy. She takes the utopian ideals of clubland – sex, community, abandon – and massively amplifies them back at the dancers, singing to each one of them and the club as a whole. As her voice surges onto and fills the dancefloor, it really does feel like we're all getting stronger'.
Posted by Transpontine at 8:53 pm

Rest in Peace. Never heard of her before, or heard any of her songs... but she obviously was quite loved.

Loletta is the House Mother of Disco! Her music has made history - she will live in our souls forever!