Dancing in the Dark - Bert Williams

'These were bright new monied times in which society people were encouraged to enjoy the primitive theatrics of those who appeared to be finally understanding that their principal role was now to entertain. Listen. The wail of a trumpet as it screeches crazily towards heaven and then shudders and breaks and falls back to earth where its lament is replaced by the anxious syncopated tap tap tapping of clumsily shod feet beating out their joyous black misery in a tattoo of sweating servitude. Performative bondage'

Dancing in the Dark (2005) by Caryl Phillips is a fictionalised account of the life of Bert Williams (1874-1922), a Bahamas-born performer who became famous on the American stage in the era when black actors were expected to wear 'blackface' to conform to white audience's expectations.

As such it is a beautifully-written reflection on the role of the black performer in a racist context, whose very achievements come at high personal and collective cost. Williams was in some ways a groundbreaking figure - co-writer of the first black production on Broadway (In Dahomey, 1903); the only black performer in Ziegfeld's follies before the First World War; helping to spread the cakewalk dance craze across the USA and then to England on a visit here; and a singer in the early days of the record industry. But his success was predicated on him continuing to play the stereotypical role of the dim-witted 'darky' and when he attempted to step beyond this the response was hostile. Williams was one of the first black film actors in the now lost Darktown Jubilee (1914), but the sight of a zoot suit wearing black leading man provoked near riots among white audiences. 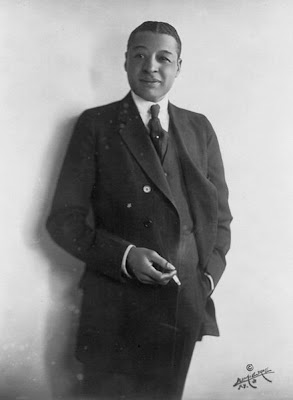 'Others will come after me to entertain you, and they will happily change their name and put on whatever clownish costume you wish them to wear, and dance, and sing, and perform in a manner that will amuse you, and you will mimic them, and you will make your money, but know that at the darkest point of the night, when no eyes are upon them, these people's souls will be heavy, and eventually some among them will say no, and you will see their sadness, and then you will turn from them and choose somebody else to place in the empty room, or nudge onto your empty stage'

Posted by Transpontine at 9:27 pm