In remembrance of Ali Höhler

At this time of year it is customary to raise a glass to one of Germany's finest music critics: Albrecht (Ali) Höhler (1898-1933).

His exemplary practical critique was directed againt Horst Wessel, a musician, song writer and founder of a Nazi stormtrooper Schalmeienkapelle (shawm band - the shawn being a kind of oboe). Wessel was a leading Nazi party organiser in Berlin. Among other things he organised an attack on the local headquarters of the Communist Party in Friedrichshain, Berlin, during which four workers sustained serious injuries.

In January 1930 Wessel was shot in the head by Ali Höhler, seemingly at the instigation of members of the communist Roter Frontkämpferbund (Red Front Fighters League). Wessel died from his injuries a few weeks later and was buried on 23 February 1930 in a public funeral stage managed by Goebbels. Unfortunately one of his songs survived and became known as the "Horst Wessel Lied" and the official anthem of the Nazi Party.

When the Nazis came to power they killed Höhler and elevated Wessel to the rank of a holy martyr (one magazine wrote: 'How high Horst Wessel towers over that Jesus of Nazareth').

So here's to Ali Höhler - he had some fine tattoos too: 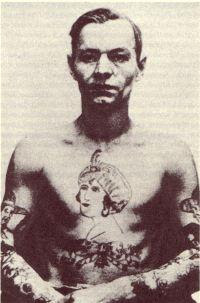 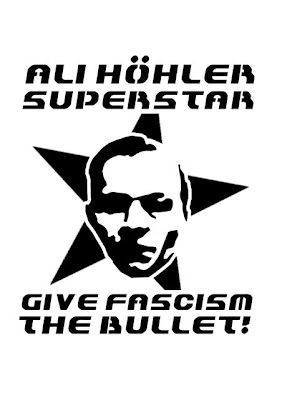 Posted by Transpontine at 4:45 pm

Wessel's grave was desecrated last year on the 70th anniversary of his murder and is slowly disintegrating. I wish I knew more about Hoehler and the circumstances of his death; what must have been his thoughts once the Nazis took control and his life held every day in the balance. Fascists and communists... was there anything to distinguish one from the other for the common man throughout the Weimar years?

Wessel's grave wasn't desecrated, after a number of years if there is nobody to pay for a graves maintenance then the body is disinturned and someone else is buried in the plot. This is common in Germany.

After the fall of the Third Reich in May 1945, Wessel's grave was in Communist-ruled East Berlin. The memorial was destroyed and Wessel's remains apparently were disinterred and also destroyed. The grave site was long marked only by part of the headstone of Wessel's father, Ludwig, from which the surname "Wessel" had been removed.[23] This too was destroyed around 2005 and the site is now marked only by a raised mound of earth bounded by ivy, with two iceplants in the centre. However, the nearby grave of relative Clara Wessel (1876–1951) has been given a new headstone.