I went to Berlin recently for the launch of the new issue (number 11) of Datacide - 'the magazine for noise and politics'. 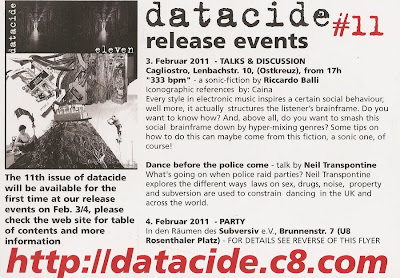 There were a couple of events. First up was a series of talks at Cagliostro, a bar in Friedrichshain which also houses the Praxis record shop (plenty of breakcore, noise and hard drum and bass vinyl with some radical literature too - funny seeing Aufheben, the German-titled English communist magazine on sale in Germany). Praxis is the label started by Christoph Fringeli who also initiated Datacide. Note the extremely rare Association of Autonomous Astronauts slipmat in the shop: 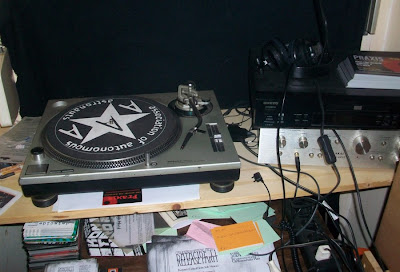 I gave a talk based on my article in the magazine, Dance Before the Police Come, looking at the different ways the state tries to regulate clubs, raves and parties. I also reflected on the role of sound systems in the recent student demonstrations in the UK.

Nemeton spoke about the Tea Party movement and the radical right in the US, also based around her article in Datacide#11 . She dismissed claims that it simply represents a grass roots popular movement, highlighting the role of Fox media and established right wing politicians in launching and promoting it.

Riccardo Balli missed his flight from Italy but gave a reading of his short fiction piece ' 333 bpm' the next day. 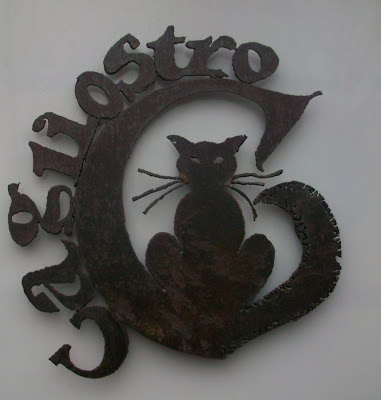 Then on the Friday night there was a launch party at Subversiv, a housing project with a bar and brick basement. Berlin nightlife gets going late, the music started about one and the dancefloor peaked around four. Hard breaks and beats were supplied by DJs from Berlin, Bologna, Los Angeles and Essex including Christoph Fringeli, Balli (Sonic Belligeranza), Kovert, Baseck (Dark Matter), Nemeton (Dark Matter), LT, Cannibal Brother. I missed the last couple as I had to leave to get to the airport. But it was a good party and the notion of praxis as the unity of theory and action was certainly embedded in the event with at least four of the DJs also writing articles for the new Datacide. 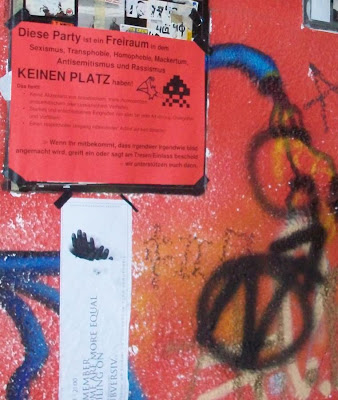 [In the basemenet of Subversiv - the red poster sets out the venue's rules: 'Diese Party ist ein Freiraum in dem Sexismus, Transphobe, Homophobe, Mackertum, Antisemitismus and Rassismus KEINEN PLATZ haben' ( approximately 'this party is a free space in which sexism, transphobia, homophobia, macho behaviour, anti-semitism and racism have no place')] 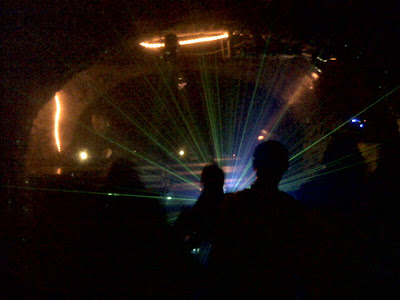 Subversiv is one of the few squatted projects left in Berlin from the period after the fall of the wall when vacant properties were occupied en masse. Many of these were subsequently licensed in deals with the local government, but as the buildings have been sold off to developers and private landlords most have been evicted.

The day before I arrived another high profile squat was evicted in Friedrichshain, with 25 residents cleared from the Liebig 14 tenement block. The eviction was a big deal, the day was announced in advance and thousands of cops swamped the streets to make sure it went ahead.

On Wednesday night (2nd February) a march of a couple of thousand people in the area was stopped by the police short of its destination, and there were clashes followed by cat and mouse chasing through the streets with groups heading off causing mischief. I saw smashed bank windows and lots of graffiti, and apparently windows were broken at the O2 centre (big corporate entertainment centre similar to its London counterpart).

The full contents of Datacide #11 are as follows:
Datacide events - page 3
Political news compiled by Nemeton - page 4-5
Features:
“Hedonism and Revolution: The Barricade and the Dancefloor” by Christoph Fringeli, page 6
“Dope smuggling, LSD manufacture, organized crime & the law in 1960s London”
by Stewart Home, page 8
“Shaking the Foundations: Reggae soundsystem meets ‘Big Ben British values’ downtown” by John Eden, page 12
“Tortugan tower blocks? Pirate signals from the margins” by Alexis Wolton, page 16
“Dancing before the police come” by Neil Transpontine, page 21
“From Subculture to Hegemony: Transversal Strategies of the New Right in Neofolk and Industrial” by Christoph Fringeli, page 24
“From Conspiracy Theories to Attempted Assassinations: The American Radical Right and the Rise of the Tea Party Movement” by Nemeton, page 28
“How to start with the subject. Notes on Burroughs and the ‘combination of all forms of struggle’” by R. C., page 37

“Beat Blasted Planet. An interview with Steve Goodman on ‘Sonic Warfare’” by Matthew Fuller and Steve Goodman, page 58
“Free Parties” by Terra Audio, page 60
“This is the end… the official ending” by Gorki Plubakter, page 61

Available now for EUR 4.00 incl. postage – order now by sending this amount via paypal to praxis(at)c8.com, or send EUR 10 for 3 issues (note that currently only issues 5, 7 and 10 are still available, but you can also pre-order future issues.) Also from the Praxis Webshop.

The zine is now available in London, currently exclusively at the 56a Info Shop, 56 Crampton Street, SE17.
See also Datacide in Rome 2009, Datacide in Berlin 2008.
Posted by Transpontine at 8:14 am

Just noticed all the links from my blog on yr page. You can get rid of them to make the page look better by going into yr dashboard and in the comments section there is a show/hide backlinks choice. That allows me to have you in my bloglist (which is the cause of it all) but not coming up all the time under yr posts.
Makes it look a lot better.
Regards/