The wedding of Prince Charles and Lady Diana Spencer was announced in February 1981 during the first two years of an incoming Conservative government (tick). Unemployment was high amidst cuts and austerity (tick). The first of what were to be a wave of major riots had taken place (tick) - the Bristol uprising of April May 1980 setting the tone for the following year's events.

A lot happened between the announcement of that engagement and the wedding itself on 29th July 1981. The Hunger Strikes in the North of Ireland set off a huge wave of demonstrations and riots there and across the world - 6 prisoners had died by the time Chas'n'Di walked down the aisle. Meanwhile on the streets of England, tensions between (mainly) young black people and the police erupted in Brixton in April 1981 and then in July in towns and cities across the country. On the night before the wedding, there was rioting in Toxteth, Liverpool. Chief Constable Kenneth Oxford authorised the police tactic of driving Land Rovers at high speed towards the crowd - a 23 year old disabled man, David Moore, could not get out of way and was run over and killed. Nobody can seriously maintain then that the 1981 Royal Wedding 'brought the nation together' in any meaningful way.

The following cartoon was published in socialist magazine The Leveller (no.61, 24 July 1981), showing the royal cake besieged by rioters. Prime Minister Thatcher watches from the tier beneath the royal couple, while below her a line of riot police keep guard. The bottom of the cake reads Brixton, Toxteth, Southall - scenes of major riots at the time. 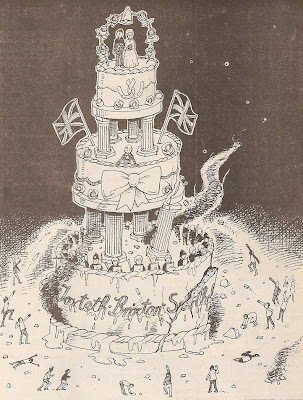 There were some populist royalist celebrations though, and little in the way of actual demonstrations against the Wedding spectacle. David Cameron was so excited in 1981 that he apparently slept in the Mall (note to American readers- that's the road leading up to Buckingham Palace, not a random shopping centre). I was at school and went with my sister to the Funk the Wedding carnival in Clissold Park in North London, an anti-royalist event organised by Rock Against Racism. From what I recall it was unexciting but hey it was some kind of statement, with a good few thousand people there. Headliners Tribesman were a UK reggae band, who incidentally made a record about another London green space - Finsbury Park. Joshua Hi -Fi was a north east London reggae sound system. Don't know anything about Movement or Monkey Business who also played that day.

Advert for event from Leveller no.61: 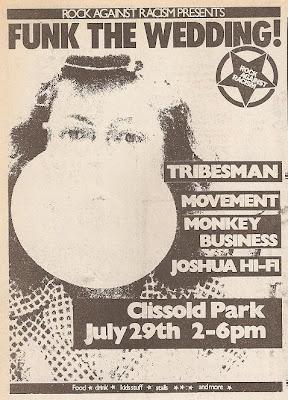 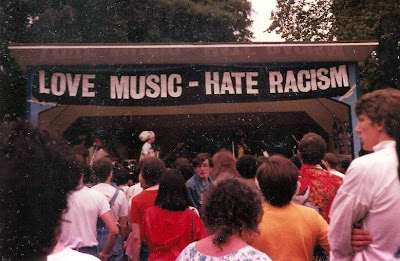 In 2010, popular fervour for Royalty is much more muted than it was in 1980/81. Judging by my large and diverse workplace today, for every person expressing excitement about 'Wills and Kate' there are several fearful for their jobs moaning about paying for rich people to get married . No doubt at some point we will be fed the line that the public purse as such isn't paying the full cost of the wedding, as if any of the Royal wealth wasn't extorted from the public at some point or other (the point of the sword to be precise).

If this youngish couple want to go and get married somewhere quietly in private, that's their business. But of course there's nothing private about a Royal Wedding. When other people announce their marriage it doesn't get wallpapered all over the media, or prompt a statement from the Prime Minister. If, or rather when, the wedding is turned into a political spectacle, it invites a political response. Already Cameron has predicted "a great day of national celebration" and said that it's "great to have a bit of unadulterated good news" (unspoken 'to stop you proles moaning about the cuts for a day or two'). The more the wedding is turned into a political demonstration of 'we're all in together' nonsense, the more likely it is that it will turn into Amsterdam 1965 rather than London 1981 - when the anarchic Provo movement caused chaos at the royal wedding of Princess Beatrix of the Netherlands and ex-Hitler Youth Claus von Amsberg, letting off smokebombs and clashing with police.