Courtesy of Pops (Sentinel Design) and Wayne Anthony, some classic acid house footage from July 1989. It starts off with a Biology rave in Watford, but after about 3:15 minutes the action switches to Clapham Common with people dancing in the sunlight.

The Common was the scene of a few parties in this period. Test Pressing has reproduced Whose Smiley Now? an article about it from The Face (August 1982), written by Sheryl Garratt:

"'Mental, Mental, Let's go fucking mental!' There were stories last year of people dancing to police sirens, traffic noises, anything to stretch the Summer of Love out a little longer, but never before have I seen people dancing to a generator. It started when a sound system was set up on Clapham Common on the Sunday morning after a Saturday all-nighter, the party simply carrying on in the middle of this South London park. Word spread, and the following week clubbers truned up for a repeat performance. 1,000 people danced their Sunday away on the grass while police took souvenir snapshots from nearby buildings. 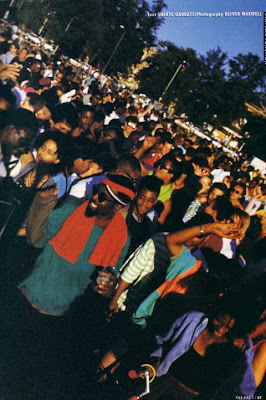 When the same thing happened one week later the police took a more active part and refused to allow the sound van onto the common... Towards the end of the afternoon the heroes of the day arrived. These were the people shouldering a hired generator and a home stereo, bringing much of the crowd to its feet in anticipation. The generator all but drowned out the music, but the chants were loud, the atmosphere hot, and with a few hundred people packed protectively around the sound source, the police retreated, with a hail of bottles and cans following amiably in their wake. Surprizingly (but given that no-one was doing any real harm, sensibly), they didn't return. 'It's only a matter of time' said one obvserver with relish, 'before there's a riot'."

I wasn't at these 1989 parties, but I was on Clapham Common on Sunday April 30th 1995 when a 3,000 strong march against the Criminal Justice Act ended up there. There was a May Day festival in progress there with bands and marquees, but neither the police nor the festival organisers (the GMB union) were keen to allow the United Systems anti-CJA rig on to the Common. It pulled up alongside the park, and we danced on the grass. I came across some photos from that day by David Minuk, an American visiting London at the time: 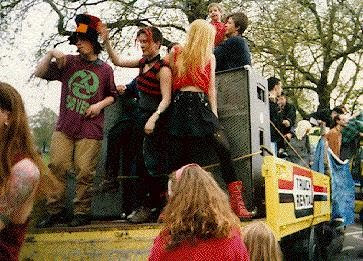 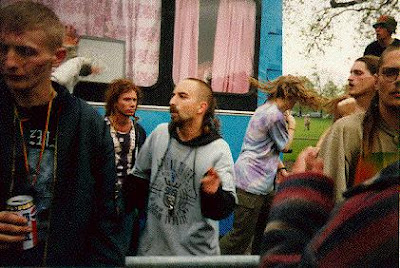 Thanks to Controlled Weirdness for tipping us off about the film footage
Posted by Transpontine at 6:00 am

Hey, I was at that Clapham Common one too...Skunk Anansie were playing in a marquee, and I remember a small group of disgusted SWP kids filing out during John Otway's set (think they were expecting some Billy Bragg-style politico folkie!) And I remember the rave rig and assorted dayglo lunatics...ah, Rednek t-shirts and drinking 33p cans of 2% Baltic, those were the days. Don't suppose you have any more pics of this event? Checked that guy's site, but would love to see if there's any of me and my mates.

Thanks for this. I was there in 1995 and remember it fondly. It seems very recent, but the images look really dated

No more photos of this I'm afraid, maybe someone else has, let me know.

I am afraid with aging 15 years to 1995 seems like yesterday, then you keep meeting grown people who look at you and say 'I was 5 then'.

I think I was also there in 1995, and also seem to recall a festival in 1999 for the legalisation of marijuana.

A quick google suggests Mayday 1999. There was a reclaim the streets circle line party in the day, then the festival, then off to Psychic TV at the Royal Festival Hall in the evening.

I was more energetic in them days :-)

That first clip is brilliant