In February 1985 the miners strike in Britain was in its last few weeks. A highly organised state sponsored strike breaking operation was having an effect, and more than 150 miners had been jailed for their activities during the strike.
It's surprizing that nearly a year after the strike started there had not been a major demonstration in London in support of the miners (other than a lobby of parliament in June 1984), but one was called by the South East region of the Trades Union Congress, along with the Liaison Committee for the Defence of the Trade Unions, on Sunday February 24th 1985. As usual estimates of the crowd varied - the organisers said more than 50,000, the police only 15,000 which was a ludicrously low number. The demo went from Hyde Park to Trafalgar Square, and scuffles broke out as the police arrested a couple of miners in Whitehall and a section of the crowd refused to move on demanding their release. A cordon of police blocked the top of Whitehall to try and stop people from the main body of the demo in Trafalgar Square joining this, before mounted police charged in to clear the area.
If it was a riot it was a fairly one sided one. Some missiles were thrown at police but mostly ineffectual  sticks, plastic bottles and empty cans which were no match for charging horses and swinging batons. My main memory is of panic and chaos as horses charged and police on foot piled into the crowd to try and make arrests. Some people were crushed and I remember demonstrators climbing on to police lorries loaded with metal crowd control barriers and pushing the barriers into the street to try and block the police advance. More than 100 people were arrested.
The photos I took on the day aren't great but hopefully they do convey some of that chaos. 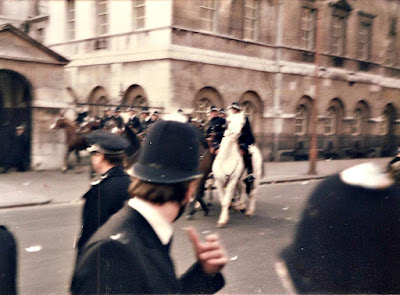 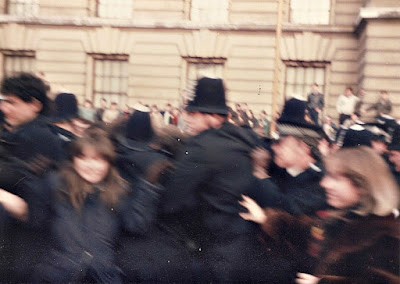 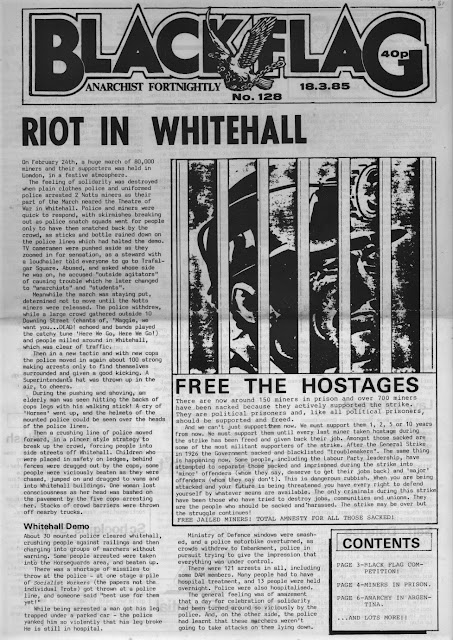 'On February 24th a huge march of 80,000 miners and their supporters was held in London, in a festive atmosphere. The feeling of solidarity was destroyed when plain clothes police and uniformed police arrested 2 Notts miners as their part of the March neared the Theatre of War in Whitehall. Police and miners were quick to respond, with skirmishes breaking out as police snatch squads went for people only to have them snatched back by the crowd, as sticks and bottles rained down on the police lines which had halted the demo.
TV cameramen were pushed aside as they zoomed in for sensation, as a steward with a loudhailer told everyone to go to Trafalgar Square. Abused, and asked whose side he was on, he accused "outside agitators" of causing trouble which he later changed to "anarchists" and "students".
Meanwhile the march was staying put, determined not to move until the Notts miners were released. The police withdrew, while a large crowd gathered outside 10 Downing Street (chants of "Maggie, we want you...DEAD! echoed and bands played the catchy tune 'Here We Go, Here We Go!) and people milled around in Whitehall which was clear of traffic.
Then in a new tactic and with new cops the police moved in again about 100 strong making arrests only to find themselves surrounded and given a good kicking. A Superintendant's hat was thrown up in the air, to cheers. During the pushing and shoving, an elderly man was seen hitting the backs of cops legs with his walking stick! A cry of 'Horses' went up, and the helmets of the mounted police could be seen over the heads of the police lines.
Then a crushing line of police moved forward, in a pincer style strategy to break up the crowd, forcing people into side streets off Whitehall. Children who were placed in safety on ledges, behind
fences, were dragged out by the cops, some people were viciously beaten as they were chased, jumped on and dragged to vans and into Whitehall buildings. One woman lost consciousness as her head was bashed on the pavement by the five cops arresting her. Stacks of crowd barriers were thrown off nearby trucks.
About 30 mounted police cleared Whitehall crushing people against railings and then charging into groups of marchers without warning. Some people arrested were taken into the Horseguards area, and beaten up. There was a shortage of missiles to throw at the police at one stage a pile of Socialist Workers (the papers not the individual Trots) got thrown at a police line, and someone said "best use for them yet!!"
While being arrested a man got his leg trapped under a parked car - the police yanked him so violently that his leg broke. He is still in hospital. Ministry of Defence windows were smashed, and a police motorbike overturned, as crowds withdrew to Embankment, police in pursuit trying to give the impression that everything was under control.
There were 121 arrests, in all, including some DAM [Direct Action Movement] members. Many people had to have hospital treatment, and 13 people were held overnight. Police were also hospitalised. The general feeling was of amazement that a day for celebration of solidarity had been turned around so viciously by the police. And, on the other side, the police had learnt that these marchers weren't going to take attacks on them lying down'.
'Gay in thick of Whitehall battle' - Capital Gay, 1 March 1985
'The day began peacefully in Hyde Park, and there was loud applause for the Lesbian and Gay Support the Miners banner as it left the park. But while the march was still filing into Trafalgar Square police blocked off both ends of Whitehall and arrested two miners. Soon afterwards all other exits from Whitehall were sealed off. Detachments of mounted police in riot gear formed in Parliament Square and Horse Guards and charged into the crowded street. The large and conspicuous lesbian and gay contingent found itself in the centre of the charge and found it impossible to make their escape from the horses surrounding them. Observers told Capital Gay "The police drew night sticks and struck out indiscriminately at the marchers"' (Capital Gay, 1 March 1985)
'Pit Violence Comes to Whitehall' - Daily Mail, 25 February 1985 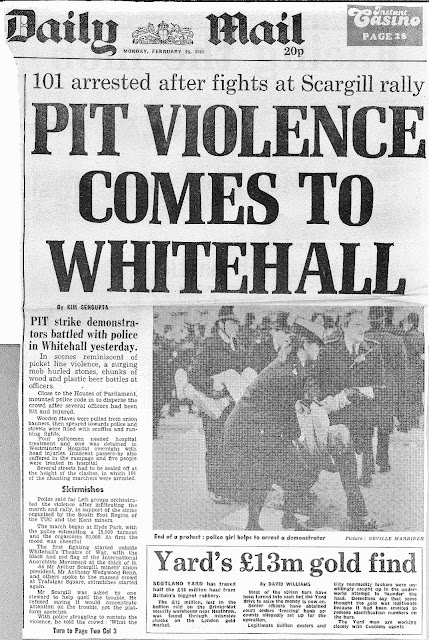 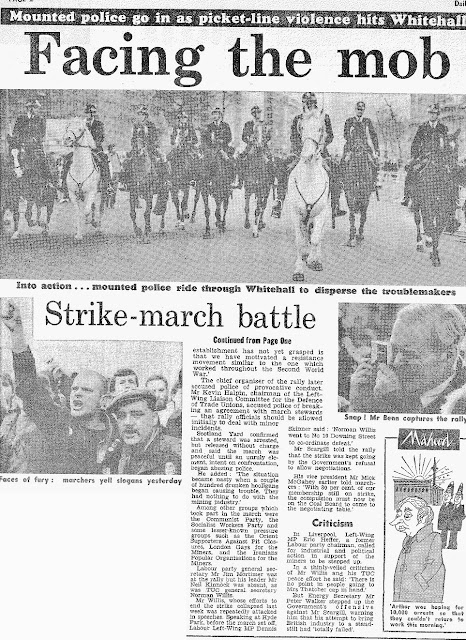 'Pit strike demonstrators battled with police in Whitehall yesterday. In scenes reminiscent of picket line violence, a surging mob hurled stones, chunks of wood and plastic beer bottles at officers. Close to the Houses of Parliament, mounted police rode in to disperse the crowd...
The first fighting started outside Whitehall's Theatre of War with the black and red flag of the International Anarchists Movement at the thick of it. As Mr Arthur Scargill, miners' union president, Mr Anthony Wedgwood Benn and others spoke to the massed crowd in Trafalgar Square, skirmishes started again.
[...] Among other groups which took part in the march were the Communist Party, the Socialist Workers Party and some lesser-known pressure groups such as the Orient Supporters Against Pit Closures, London Gays for the Miners and the the Iranians Popular Organisations for the Miners'.
'100 held as police tackle miners' - Guardian, 25 February 198 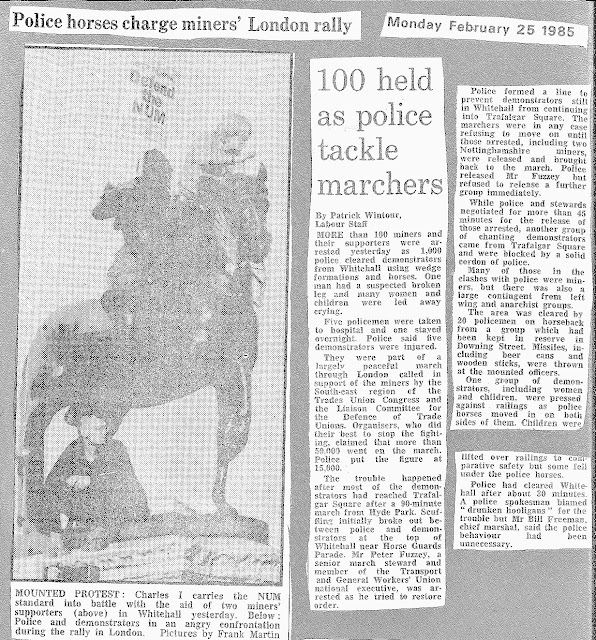 'One group of demonstrators, including women and children, were pressed against railings as police horses moved in on both sides of them. Children were lifted over railings to comparative safety but some fell under the police horses'.  The picture shows demonstrators climbing on to a statue of Charles I.
Update - some additional photos from the day provided by downlander 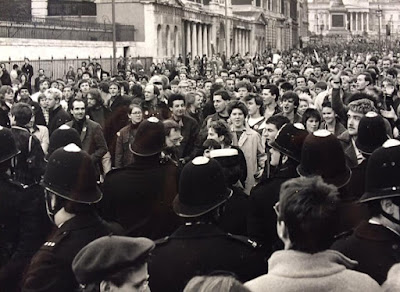 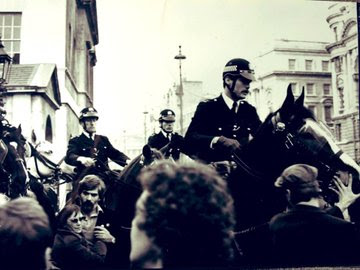 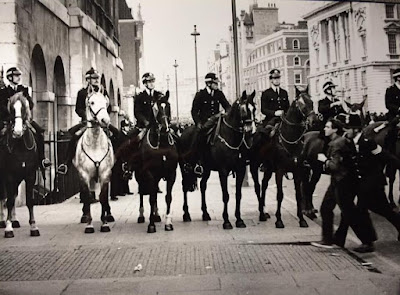 (thanks to LGSMPride who posted the Capital Gay clipping recently)
See previously on the 1984/5 miners strike:'Sound of police truncheon against body': David Peace's miners strike soundscapeMiners demo in Mansfield 1984
Miners demo in Durham 1984
Miners support in KentThe 'Here we go' chantWhat did you do in the strike - my mix of music from the miners strike
Posted by Transpontine at 8/15/2022 07:47:00 am