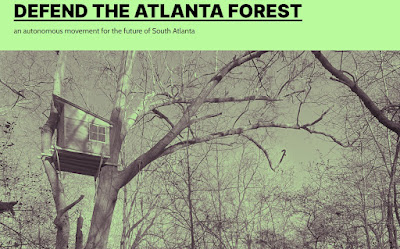 'Defend the Atlanta Forest' is a movement opposing the destruction of woodland in Atlanta to build a police training facility that would include a mock city (perhaps similar to the Metropolitan Police's riot training 'town' in Kent). The campaign has included protest camps  tree dwelling and lots of music and creativity, including a music festival there last month. 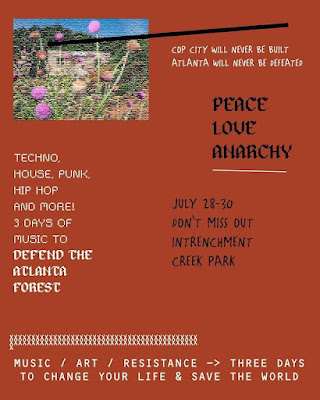 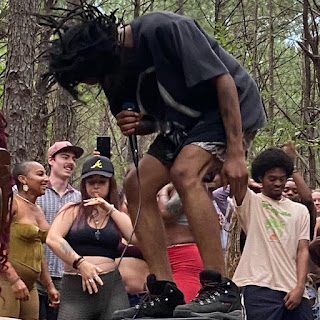 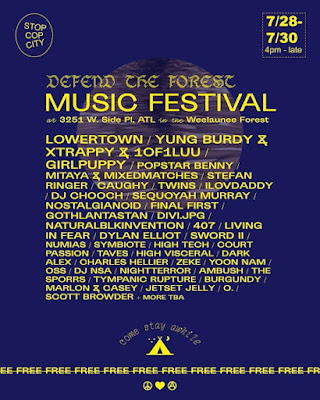 Some nice lines in this flyer distributed there:
'This is not a Music Festival... Because we are not here as consumers or as mere spectators. This is not another photo-op, another 'networking opportunity'. We are here because our need for a free forest, culture, and existence can't be crushed by the police, nor can it be sold back to us as an image in an uninspired Hollywood rip-off.
In a cave called Divje Babe, located in present-day Slovenia, archeologists have recently discovered a 60,000 year old flute. The human need for music has been with us since the very beginning. We
are here to affirm that this deep and timeless desire, which has survived an Ice Age, the rise of empires and states, the advent of borders; slavery, war, famine and Holocausts, is an important part of the current struggle...
Our communities will not be held together by their ability to kill and maim enemies or heretics. They will be held together by music, and the ability to generate common luxuries. So let's not say 'Oh they don't really care about the struggle, they are only here for the party' or, 'this is not about music and festivals and all of this crap, this is about serious politics and organising." Instead let's say the truth:
this is only a glimpse of what we could give one another if we manage to outlive the oil-based economics of the current world system. The emancipation of the senses, the free development of the imagination and the passions: this is precisely what we are fighting for' 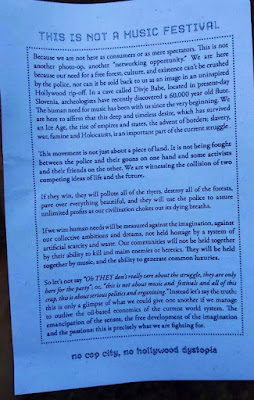