Following our earlier post on the Camden Palace from The Face, 1983 here's a couple more courtesy of the excellent Like Punk Never Happened - Brian McCloskey's Smash Hits Archive (click on images to enlarge).

The first article, from July 22 1982 is a review of a live event for Gary Crowley's Tuesday Club Capitol Radio show with live appearances from Culture Club, Bananarama and The Higsons. It includes a great picture of Joe Strummer with Jennie Belle Star, Jerrry Dammers and Chrissy Boy from Madness. 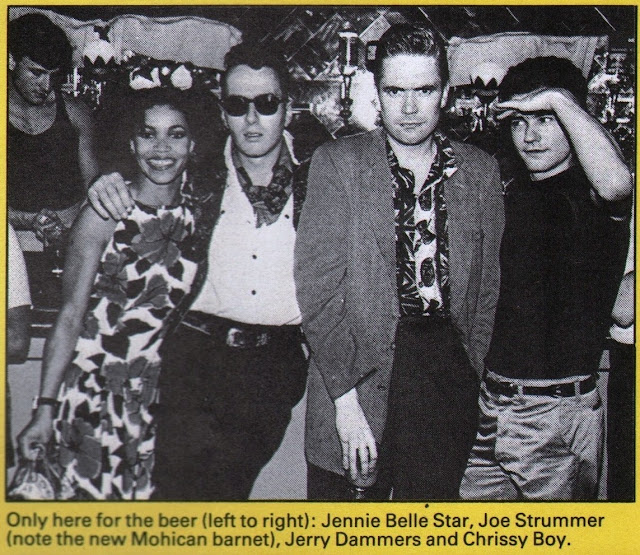 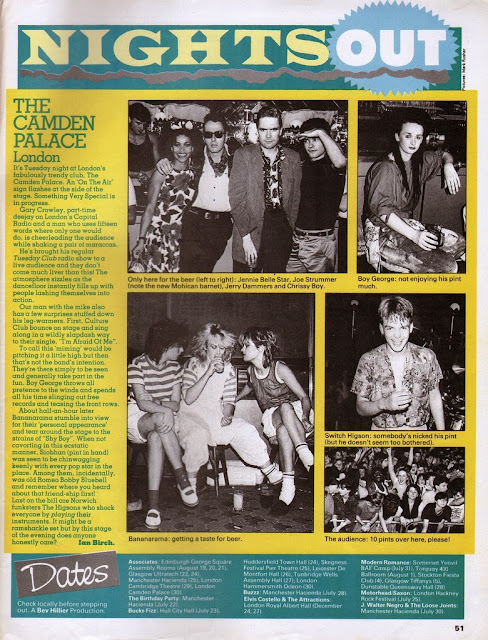 In terms of a regular night out at the Palace, Deborah Steele's article from Smash Hits, 15 August 1983 is more evocative. It is headlined with Steve Strange's description of the Palace (which had opened some 18 months previously) as 'A club for the people created by the people'.

'The Camden Palace... a place full of famous people trying to look ordinary and ordinary people trying to look famous... Many would go so far as to argue that Thursdays represent what British pop is all about - the people, the stars, the music, the fashions  and the attitudes... Steve Strange (of course), The Palace's genial host, signing autographs, having his picture taken and looking very striking in 'Tom Bailey' goggles and blue tea towel wrapped round his head. He tells me his new image is going to be that of an American footballer. Also pretending not to be famous are Edwyn Collins from Orange Juice, Chris Foreman from Madness, Miranda and Jennie Belle Star, a couple of Hoovers and George and Andrew from Wham! Oddly enough, no-one really pays these 'stars' too much attention ("everyone's a star here", says Steve)...

'The quality of the sound is incredible (and loud too) and the light show has to be seen to be believed. Lazers, strobes, neon strips and great shafts of light beaming out of computer-controlled rotating gantries, it's like the famous spaceship scene out of Close Encounters. Add to that a massive video screen which descends every so often to show the latest pop videos and you can understand why so many people do nothing but dance all night... Whether it's the bar proppers, posers, pop-stars upstairs or the dancers on the floor, The Palace is about having a good time'.

The music from DJ Rusty Egan is described as 'largely electro-disco with a few old Roxy Music and Simple Minds evergreens', catering to a crowd in a diversity of styles - an 'assortment of Boy George clones, bleached quiffs, fish-net stockings, expensive suits and sunglasses'. People queuing round the block to pay an 'expensive' £4 to get in and £1.60 a drink. 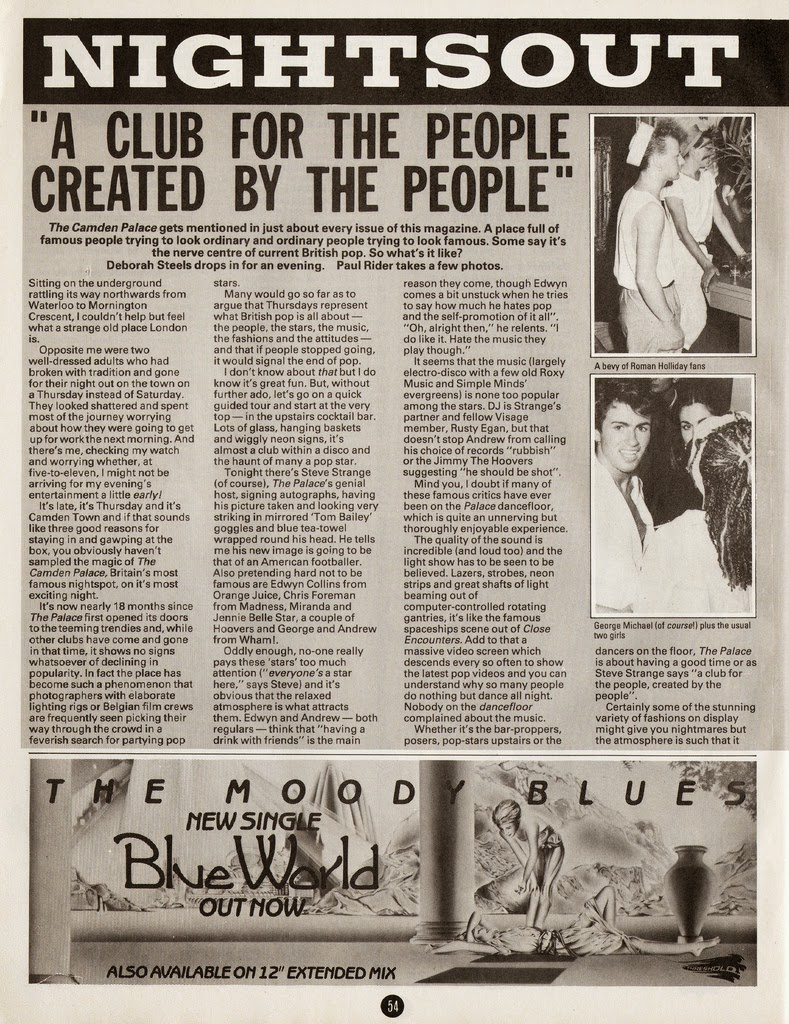 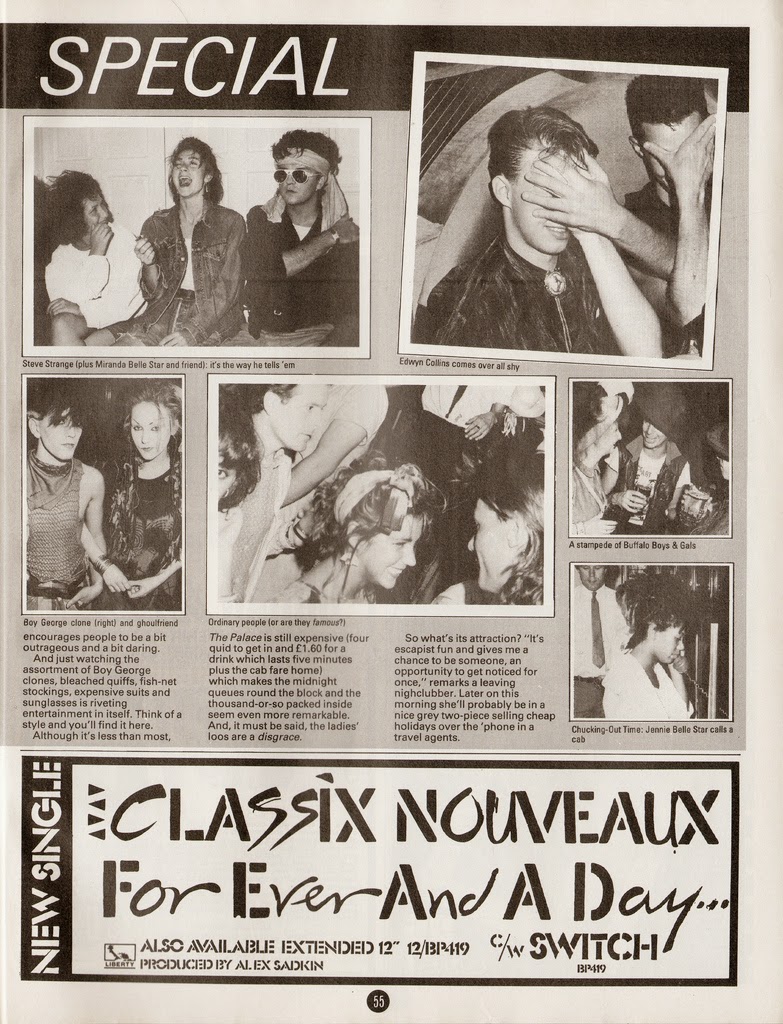 See also:  Posing at the Picture Place, Standard, May 11, 1983 for a reminder of the dole/cash in hand day lives of the night time diy superstars - ''I’m wrecked', Nick announces as he downs his sixth pint of lager at about 2am. “I was so late waking up yesterday I had to take a taxi to the dole to sign on before I went into work.” Nick [not his real name, obviously] looks startling in a hat so huge it has to be seriously trendy, and is well aware of the irony of his remark. He is 19 and clears £80 a week in Vivienne Westwood’s clothes shop which also dresses him for next to nothing, another £15 on Saturday checking coats in a nightclub – oh, and of course £22 social security. “That’s just pin money,” he says. “It pays the rent.”... Mike uses his £25-a-week dole on top of what he earns in Kensington Market to fund his nights out. Among a repertoire of sharp practices people here admit to, fare-dodging is regarded as essential and one 18-year-old charges friends £1 for lifts in his car home to the suburbs'.

Posted by Transpontine at 1:41 pm

Met boy George and maralyn there, they was, no inibitions at all unforgettable times...