Good luck to firefighters on strike today in England and Wales in their pensions dispute, and to those in the London fire stations facing closure next week by Boris Johnson's cuts. 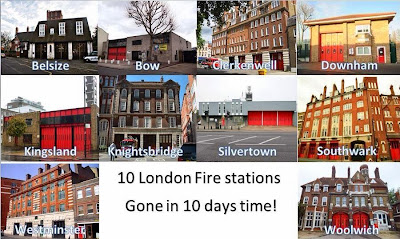 There's still a couple of days left on BBC IPlayer to watch 'Never Mind the Baubles: Xmas '77 with the Sex Pistols', Julien Temple's remarkable documentary about the Pistols last gigs in the UK. In 1977, firefighters were on all out strike over pay, walking out on 14 November for a 30% pay claim. The government mobilised the army to operate a strikebreaking fire service, and as Christmas approached firefighters and their families were facing great hardship. The Sex Pistols meanwhile were being banned from venues all over the country.


On Christmas Day 1977, the Pistols played two gigs in Ivanhoe's nightclub, Huddersfield. The first was a party for the striking firefighters' families, with the band handing out Xmas presents including t-shirts, albums and skateboards. The gig ended up with a cake fight and kids pogoing in their 'Never Mind the Bollocks' t-shirts. In the evening the band played a regular gig for adults. Temple was there on the day and filmed both sets, their last on British soil before heading off to the USA where they split up in January 1978.

The Pistols weren't the only band to play a benefit gig. The picture below is of popular pub rock band The Pirates at Hammersmith Fire Station in 1977, who also played for the strikers. Drummer Frank Farley's dad had been station officer at Hammersmith.

25 years later in November 2002, firefighters staged a series of strikes in another pay dispute. Another old punk, Joe Strummer, played a benefit gig for them at Acton Town Hall and was joined on stage by ex-Clash guitarist Mick Jones - the first  and only time they had played together since Jones left The Clash in 1983. The following month Strummer died.

Strange how these iconic moments in the history of punk and its aftermath coincided with these waves of firefighters' struggles. 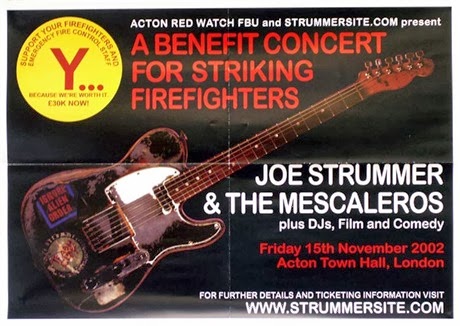 Posted by Transpontine at 6:34 pm