So Prime Minister David Cameron sticks his nose into a current court case and proclaims his support for Nigella Lawson - well of course she is the daughter of a former Tory minister. Judging by twitter and facebook he's not the only one - my timelines are full of people proclaiming their allegiance to #TeamNigella. I've got nothing against that, but I would like to see a bit more solidarity with #TeamTulisa.

The difference between the support given to Nigella vs. Tulisa says a lot about the different ways drugs are regarded according to class. Nigella has admitted taking cocaine, and has been accused by witnesses in court of doing so regularly. Does anyone imagine she is going to be arrested and questioned about this? No, a bit of Class A drug use is OK for upper class celebrities.

But what about ex-N-Dubz singer Tulisa Contostavlos? She has been charged with being involved with the supply of Class A Drugs followed an operation by The Scum newspaper. Their story claimed that she had merely introduced their reporter to a dealer after the former said he was trying to score some coke. No indulgence for her though - a working class London Irish/Cypriot woman is seen as being practically a gangster if she is accused of going anywhere near drugs. And of course a woman from her background who dares to have a 'female boss' tattoo is considered fair game to be denounced as a 'chav' and cut down to size. 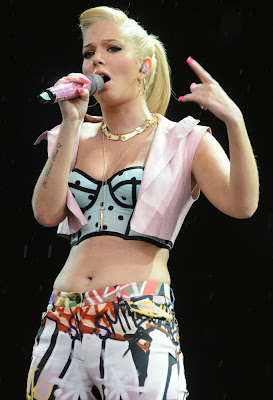 Posted by Transpontine at 10:46 pm