There's now an online archive of every issue of Muzik magazine, from 1995 to 2003. The launch of the magazine by IPC was an indicator of the state of music in the UK a the time - dance music was massive and the coverage of it in IPC's NME was woeful. Magazines like Mixmag and DJ were flying off the shelves and IPC wanted some of the action. Likewise by 2003 the boom was well and truly over and there had been a revival of the guitar-led bands that NME liked to feature - so it was farewell Muzik.

There's lots of great material to be found in this archive. From Issue no.2, July 1995, here's an article on pirate radio (click on image to enlarge, or go to the archive and look through the whole issue).

'''Meet me outside McDonals in Crystal Palace. I'll be there in 10 minutes". The voice on the mobile phone belongs to the man behind Energy FM, one of London's longest-running pirate radio stations... As one of the highest places in London, Crystal Palace is a prime location for pirate radio transmitters and a prime target for the DTI investigators. Energy has been broadcasting on and off from here for over three years and the station's boss knows the area intimately. Tower blocks are central to pirate radio mythology because their height provides stations with the widest possible catchment area. Most hide their transmitter in a lift shaft or a drainage pipe within cable reach of an aerial placed on top of a block. Energy's transmitter is sufficiently high to enable their programmes to occasionally be picked up in Luton, which is some 50 miles away'. Dream FM (Leeds) and Power FM (Nottingham) also feature in the article, as does Kiss which by then had gone from being a pirate to being legit (the article mentions that they also used Crystal Palace tower blocks). 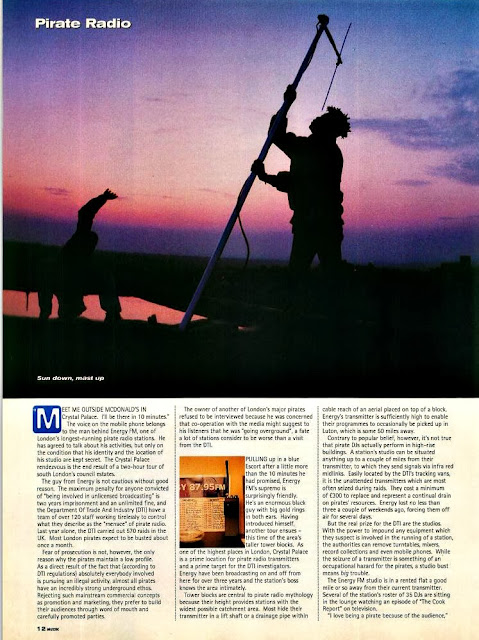 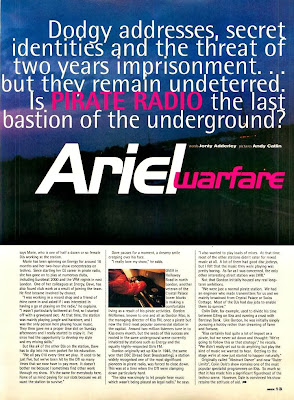 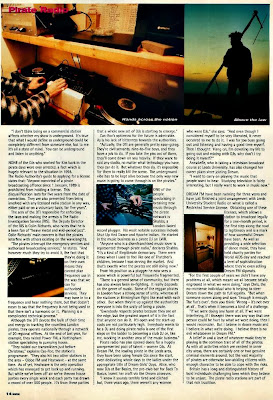 Posted by Transpontine at 10:21 am