Vienna: in the fascist ballroom

The WKR-Ball in Vienna is an 'The annual ballroom dancefest of Austria’s pan-Germanist, far right student fraternities in the former Imperial Palace and official residence of the Austrian president in Vienna' (Martin Jordan). It has been going on for more than fifty years, and this year fell on International Holocaust Remembrance Day (27 January), a date that also marks the anniversary of the liberation of Auschwitz.

Guests included Heinz-Christian Strache, leader of the Austrian far-right Freedom Party, and Marine Le Pen, the leader of France's National Front. The venue was protected by riot police from counter-demonstrators who blocked streets, delaying guests gettting to the ball. 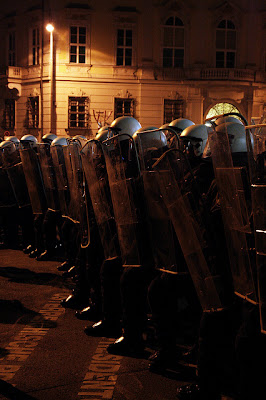 Anarchistische Gruppe Freiburg report that 'A large coalition of leftist and radical leftist groups mobilized on the same evening with a mass demonstration held against it. From Germany, several buses were organized to Vienna. The bus from Frankfurt was pulled shortly after the border in Salzburg by a large contingent of police... All passengers were searched and photographed. On the left-wing demonstration, which went from Westbahnhof to the Hofburg, about 1,800 people took part...  At the end of the demonstration.... [there were] numerous direct actions, blockades and attacks on fraternities, Ball guests and neo-Nazis... In total 21 people were taken into custody'.

Austrian fascist leader Strache has sparked outrage with comments he made at the ball,  comparing the protest to the nazis' "Kristallnacht" pogrom and telling his supporters "We are the new Jews!".

Posted by Transpontine at 10:26 pm

Actually on that day there were three manifestations against the ball this year, with around 5.000 participants alltogether. The protesters managed to delay the opening for 1.5 hours by numerous guerilla road-blockades. In the city-center's narrow streets, bicycles are just quicker than the police :)

More importantly, the overall response towards the protests was very positive this year. As a consequence, the venue announced that they won't rent out their space to the organisation next year.

The protests against this event first emerged in 2008, when an anti-fascist rave was organised in the nearby museumsquartier ("DekaDance - Bass away right-wing brotherhoods" http://no-racism.net/article/2425/). That year, the actual street-protests only started around 11pm, when the police had already withdrawn large parts of their forces. The next day, the police was sharply criticized for their "lax" behaviour.

Like every year since then, there was also a special radio-programme: more than 7 hours of live reports, interviews and documentaries were broadcasted on Radio Orange 94.0 FM, Vienna's community radio.

You can find more information at http://nowkr.wordpress.com/ and some flyers from recent years at http://dubsquare.net/?s=wkr