At the Salvation Army charity shop on Deptford High Street this week I came across this classic 12" from 1980. 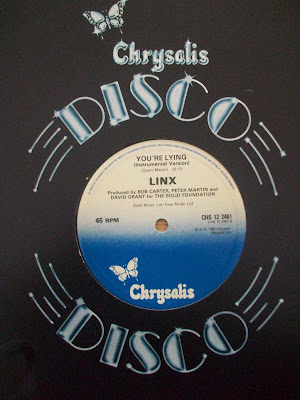 I knew it was a sign that I had to get around to finishing the long delayed post on Brit-funk (or jazz funk as some prefer to call it). I will spare you the analysis now and let the music speak for itself, but suffice it to say that it is incredible to me that so little has been written about the outpouring of UK dance music creativity in the late 70s/early 80s compared with the amount that has been written about punk and post-punk from the same period.

I have chosen ten hit tracks which some true soul boys and girls might slightly turn their nose up at for being a bit obvious - but these were the soundtrack to the weddings and school discos of my childhood so I will try and be true to that.

The Real Thing were the forerunners. The band started out in Liverpool in 1970 and indeed the title of their 1977 album Four from Eight references the Liverpool 8 area (Toxteth). They had a string of soul hits (notably You to Me are Everything) but had definitely embraced the funk by the time of 1979's Can you Feel the Force? Mention of the Force obviously links this to the wave of Star Wars pop from that time, but really this is a nice slice of disco utopianism: 'You can feel the pressure lifting off your head, People who make war are making love instead, This could be the dawning of another time, Hatred is a stranger we can see the sign... Peace and love forming everywhere, Can you feel the force?'

Heatwave were an international outfit rather than British as such, but they were started in London by ex-US serviceman Johnnie Wilder and his brother Keith. Among the musicians they recruited to the band was keyboardist Rod Temperton who wrote the biggest hit, Boogie Nights (reached number 2 in UK and US charts). Temperton later wrote songs for Michael Jackson - yes the guy who wrote Thriller, Off the Wall and Rock with Me came from Cleethorpes!

Light of the World were a north London band whose members spawned many other Brit-funk projects (see below). Also check out their great London anthem, London Town

A great track by Central Line that was remixed at the time by Larry Levan of Paradise Garage fame. The person who posted this on youtube mentioned that he saw this band at the California Ballroom in Dunstable in the 1970s supporting Heatwave. My mum and dad first met at that place some years before, so I guess I owe everything to that place.

Beggar and Co. was formed by three members of Light of the World. They also worked on Spandau Ballet's funk workout Chant No.1 ( Don't Need This Pressure On).


Freeez was initiated by John Rocca. Could equally have included their Arthur Baker produced electro classic IOU. Light of the World's Jean Paul Maunick was also in this band for a while, before he went on to form Incognito - the band that carried the torch on to the next generation of British funk bands in the 1990s Acid Jazz scene.


Formed in 1981, Imagination were and wore the campest of the Brit-funk outfits, headed by lead singer Leee John. I never really forgave him for saying that he voted Conservative at some point in the 1980s, but I guess you could make a case that that was just one of many ways that he refused to conform to other people's expectations of what a Black British man should do - even if you still have to wonder what a Black gay man was doing voting Tory.

So back to Linx, who in my view made some of the greatest tracks from this time. As well as this song, they also had a hit with the outstanding Intuition among others. The band was formed by David Grant and Peter Martin. The former went on to have solo hits, the latter joined post-punk industrial funk band 23 Skidoo.

Well could do a lot more than ten, but that's enough to start with. Will leave you now with a question which I may come back to in another post: 'Soul and funk were a more significant factor in preventing support for racist parties like the National Front in the 1970s and 1980s than punk, reggae and Rock Against Racism. Discuss'.
Posted by Transpontine at 11:40 am

Great collection of memories. It was the era of the Caistor gatherings in Norfolk, listening to Greg Edwards on a Saturday night (remember the cheesy 'Bathroom call'...) and Robbie Vincent.

(Personally I'd also include David Joseph's 'You can't hide your love away from me'....)

I think there is something in your observation about the political role of soul and funk. There was of course a big 'white (Essex) soul boy' following. As a comparison of this type of phenomena, I wonder if there's any work done on the role of Mowtown in the USA in increasing support for the civil rights movement?

Not dissing reggae, punk or RAR, I just think that soul & funk has been overlooked. To get anywhere the National Front had to appeal to the young white working class, not just old people nostalgic for the Empire, but a significant proportion of their potential core audience (e.g. 'Essex boys', football firms) were not only listening to black music but taking part in the soul boy/girl scene which was more racially mixed than punk or any other scenes at that time.

and as Raven says, that seems parallel to the ways that african american music has worked here in the u.s. to pull young white folks towards anti-racist politics. Motown's the version of that which gets talked about, but i'd say it's no more important than bebop/modern jazz and funk were before and after.

the funk link is especially important, i think, because of the ways it directly linked black nationalism to a politics of pleasure. P-Funk is the most obvious version of that, but Cameo, Earth, Wind & Fire, and others are nearly as explicit...

Great selection check out a recently forme The Brit Funk Association & they have a gig in London in August. They are made up from various goups like Beggar & Co, Hi-Tension, Central Line