An excellent event in Berlin last month (October 31st) to mark the launch of the 10th issue of Datacide magazine (see programme). The venue was K9 in Kinzigstrasse, in the Friedrichshain part of the city - an area with some surviving traces of the mass wave of squatting that followed the fall of the Berlin wall. The venue itself was formerly squatted but now has some kind of regularised existence, with housing, a couple of bars and a dancefloor space downstairs. Handily it is just around the corner from the record shop run by the Praxis/Datacide crew in Mainzer Strasse - 'Tricky Tunes: Bassline Provider' the sign says - catering for all your breakbeat/dancehall needs if you are in the area: 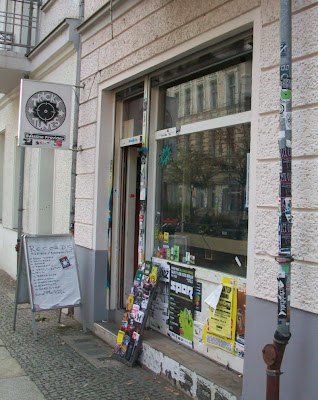 In the daytime at K9 there was a conference with contributions loosely themed - as is Datacide 10 - around the historification of rave and electronic music cultures.

Christoph Fringelli talked about ‘Hedonism and Revolution’ with particular reference to the movements of the late 1960s/early 1970s. His starting point was a critique of the dismal figure of the professional revolutionary proposed by Nechayev in the 19th century – the notion of a single-minded man with a mission and no emotions that influenced the practice of both some Bakuninist anarchists and Bolsheviks. The movements of the late 1960s by contrast initially combined political radicalism with a practice of pleasure – there was ‘cultural rupture hand in hand with political rupture’. In West Berlin in the late 1960s for instance there were at least 100 radical bars. Soon though there was a re-emergence of traditional political formations, with both the German SDS (Sozialistische Deutsche Studentenbund) and American SDS (Students for a Democratic Society) giving birth to orthodox Marxist-Leninist parties that became increasingly dismissive of the counter-culture.

Hans Christian Psaar (Unkultur) gave a talk entitled 'Kindertotenlieder for Rave Culture', taking issue with the way utopian visions of the party as temporary autonomous zone can disavow the labour that constitutes the basis for the party, ignoring questions such as who built the sound system, who is serving the drinks, who's working in the factory where the vehicles were made? Or, as I pondered later when I was helping Hans sweep up fag ends from the dancefloor at the end of the party, who cleans up afterwards?

Lauren Graber's 'Countervailing Forces: Electronic Music Countercultures and Subcultures', drew on the work of Sarah Chambers (Club Culture) and Arun Saldanha (Psychedelic White: Goa Trance and the Viscosity of Race) - both of whom criticise taking sub-cultural self-definitions as 'alternative' and 'underground' at face value. One of the questions posed by her discussion was whether the kind of music played in a scene affected its liberatory content - is a squat bar playing breakcore intrinsically more radical than the same place, with the same crowd, playing punk? Lauren defended noise and broken beats as a ‘radical practice’ to ‘get out of standardisation’, not surprizing given her affiliation with Darkmatter Soundsystem (Los Angeles). I agree with this as one strategy, but it's not the only one - experimental scenes can still generate their own rules, styles and fashions, while I'm sure we've all been in situations where the cheesiest pop track has soundracked the most exciting moment. Ultimately it's the social relations that develop between people around music and dancing that matter, rather than what tunes are playing - although I would still argue that some kinds of music have more potential than others.

Alexis Wolton talked about the history of UK pirate radio from the BBC’s first use of the term ‘pirate’ to describe Radio Luxemburg in 1933. He distinguished between an early wave of 1960s offshore pirates like Radio Caroline and Radio Invicta broadcasting from the North Sea, overtly political free radio (rare in the UK, best exemplified in Italy by Bologna’s Radio Alice in the 1970s) and the wave of dance music stations from the early 1990s using tower blocks to broadcast the tunes the official stations neglected and to create ‘a psychic space outside of the monopolies’. Along the way he mentioned various pioneers such as the 1970s/early 80s South London soul station Radio Jackie, and celebrated the continuing vibrancy of unofficial broadcasting - on the weekend before 71 pirate stations were broadcasting in London.

'Shaking the Foundations: Reggae soundsystems meet Big Ben British Values downtown' by John Eden (Uncarved/Woofah) was a freewheeling history of the impact of reggae sound system culture on the UK, tracing a line from the the first London sound system, started by Duke Vin when he moved from Jamaica in 1955 (with arguably the first sound system night being put on by him in the same year in Brixton town hall), through the tribulations of the 1970s (Notting Hill carnival riots, Misty/People Unite and the Southall anti-fascist clashes of 1979), to today's different scenes. Along the way he opposed the attempts of policy makers to create artificial integration by imposing 'national values' from above with the organic process of people coming together through music, dance, sex and drugs.

Stewart Home's Hallucination Generation talk explored some of the forgotten byways of the 1960s counter-culture, partly prompted by his investigations into the life of his mother, Julia Callan-Thompson, who was involved in the 1960s/70s hippy drug scene in Notting Hill. He referenced Terry Taylor, the author of a 1960 novel that seems to have been the first work of fiction in England to mention LSD - and in which incidentally, the hash-dealing/using mod narrator slags off the speed-using trad fans (see mod vs. trad). More generally, his talk caused me to reflect on how in 'counter cultures' defined at least partially by drugs, claims to freedom and autonomy are undercut by the fact that you are only ever a couple of steps away from a gangster with a gun and all kinds of nefarious business/criminal/security services activities.
My own talk expanded on my article in the new Datacide "A Loop Da Loop Era: towards an (anti)history of ‘rave’", with the starting point a critique of this year's '20th anniversary of house music' nostalgia in the UK. Aside from the obvious point that house music and even its UK reception goes back further than 20 years, I wanted to think about some of the deeper roots of what became known as ‘acid house’ and later as ‘rave’ and to consider some of the disparate trajectories that converge on the dancefloors of London, Manchester and Berlin from the late 1980s - such as the phenomonon of groups of disaffected young Europeans organising themselves arounds slices of Black American vinyl that goes back to the jazz age. I used Jeremy Deller's ‘The History of the World’ - which famously explores the affinities between Acid House on the one hand, and the Brass Bands associated with mining villages in the north of England on the other - as an exemplar of how interesting connections could be traced between apparently disparate social and cultural scenes. 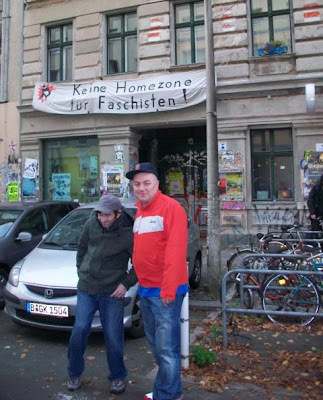 Blackmass Plastics and Controlled Weirdness stumble into the morning light after the party. The 'keine homezone fur faschisten' banner outside K9 translates as 'no safe haven for fascists' - the place has had some hassle recently from nazi 'autonomous nationalists'.

Later the action moved downstairs to the dancefloor for a 'day of the dead' party, with a good crowd (200+) and dancing, drinking and chatting until well into the next day. There was no plan to recapitulate the historical dimension of the talks, but it kind of worked out that way. After The Wirebug (Dan Hekate) had warmed things up with some laptop noise action, DJ Controlled Weirdness really turned up the heat at around 4 am with a set that started out with House Nation, headed through piano break hardcore before moving into darker territory that finished with Soundproof's Bring the Lights Down. That set it up nicely for Blackmass Plastics, prolific producer of bass heavy breakbeats in all flavours with his own Thorn Industries and Dirty Needles labels, as well as Rag and Bone records and Combat Recordings.

DJ Kovert was next, an object lesson in how to play hard and very very fast but still keep people dancing - the track that really got people excited was Current Value's Faith with its 'heaven isn't heaven anymore' sample. Anybody can bang on some speedcore/broken beats/experimental noise that leaves people leaning against the walls and stroking their chins - the trick is to do so while teasing the dancing body's expectations of regularity, so that it teeters in suspension on the edge of giving up before being pulled back into motion. The effect is like being on the Waltzers at the fairground - where you seem to be heading at high speed in one direction but are suddenly spun round the other way at the same time.

Throughout the party, visuals were supplied by X-Tractor with projections including distorted images of Walter Benjamin, Marx, Bakunin, Gramsci and Louise Michel.

All in all the event couldn't really have gone any better. John Eden has written up his own report at Uncarved, and is also selling copies of the essential Datacide 10 for a mere £2.50 at his uncarved shop.

My first time in Berlin, it was a busy weekend so didn't do much sightseeing - but was pleased to see there was a Hannah Arendt street by the new Monument to the Murdered Jews of Europe: 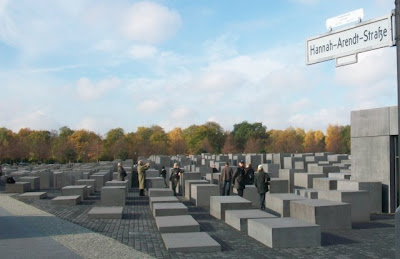 Posted by Transpontine at 11:22 am

very nice, very nice. i really wish i was there for the talks. miss talking to people about deep matters, apparently around me people are not keen on diving deep on such subjects, what leaves me with no excuse to read the past zines. sorry for the bad english.