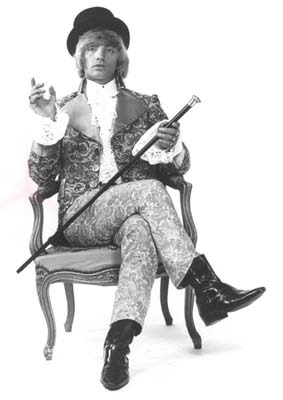 A short lived episode in the history of pirate radio was Radio Sutch, initiated by English rock'n'roller Screaming Lord Sutch (1940-1999) in 1964.
After a couple of weeks broadcasting from a fishing trawler, Sutch and his co-conspirators squatted a disused anti-aircraft defence fort in the Thames Estuary. According to his biographer, 'Radio Sutch launched from the Shivering Sands for on 27 May... Those who listened to the station recall that Sutch would play his own records and read horror stories on air late at night... "We broadcast Lady Chatterley's Lover and Fanny Hill to break up the nights" said Stuch "We used to play a lot of Max Miller albums, which at the time were banned from the BBC, just because he was a bit saucy".' To pay for it Sutch sold late night air time to American evangelists who broadcast taped Bible classes in the early hours.
Sutch sold the station to Reg Calvert in September 1964, who took it over and renamed it Radio City. Calvert was to be shot dead two years later in a row over ownership of a transmitter (there's much more about all this at Offshore Echoes) . Sutch went on to become a political prankster, standing as a joke candidate in elections for his Official Monster Raving Loony Party.
Source: The Man who was Screaming Lord Sutch by Graham Sharpe (Aurum Press, London, 2005).
Posted by Transpontine at 6:00 am