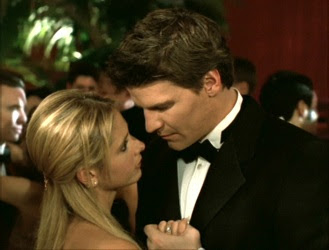 Kind of fascinated by the politics of the prom, that seasonal culture war on the dancefloor. We don't have anything quite like it in Britain, even if some schools have started imitating the US custom of an end of year dance. I don't really have much sense of the reality of it all, but obviously have been exposed to thousands of renditions of it in every single American teen TV series/film ever - who can forget when Angel turned up at Buffy's prom? Already this year, we've had the 'lesbians banned from prom' saga. Last year there was the case of boy suspended from Baptist school for attending his girlfriend's prom. From Hanover, Ohio comes news of the next battleground:
From Newark Advocate, 7 April 2010:
'Licking Valley High School is continuing its campaign against dirty dancing for this year's prom. The school's administrators have searched for ways to outlaw what they deem inappropriate dancing, such as grinding. "We've been through several different dances with different ways of enforcing it," Principal Wes Weaver said. "Really, nothing's worked."
Previously, administrators have explained the type of dancing that is prohibited, have asked students to stop dancing and have implemented more chaperones and a "penalty box." This year, Weaver and Assistant Principal Shane Adkins met with junior and senior class officers to discuss solutions, which might include just not playing problematic music. "There are people who have gone to a totally slow-dancing evening," Weaver said, adding that other solutions included theme proms with music from the 1950s or '60s.
Licking Valley isn't the only school dealing with the issue. A school in Washington is requiring its students to sign a release agreeing not to grind while at prom. Schools in Wisconsin, Rhode Island and New Hampshire also have banned grinding.
After meeting with class officers, Weaver and Adkins were approached by a group of students inquiring about planning an alternative dance on prom night, May 1. "We can't keep somebody from doing that," Weaver said. The rumors of an alternative dance, which Weaver didn't know any details about, led him to send a letter home to parents that discussed the issue at school and informed them about the possibility of a dance not sponsored by the school taking place that night. "I will want our parents to know this is what is going on," he said.
The prom still will include normal happenings, such as crowning a king and queen and slow dancing, while school officials are trying to brainstorm other ideas, too - some of which have been rejected by students, such as having games available. "That was not something that they were receptive to," Weaver said.
This isn't Licking Valley's first time addressing inappropriate dancing during prom. In 2008, more than half of attendees had left by 9:30 p.m. because of a disagreement with the number of chaperones, a group of students told The Advocate. Weaver is certain the school will work through the issue. "That dancing fad will go away, and we'll be able to go back to having prom," he said'.
Hilarious - if they're worried about lewd thoughts they should do something about the name of that school! And as for desexualising the event by way of a 1950s theme - well, have they never seen Grease? As for the outcome of the Mississippi lesbians not welcome prom, this was a poignant comment by Eric Zorn at the Chicago tribune (Stench of history hangs over prom in Mississippi, 11 April 2010):
'There were two private high school proms last weekend in Itawamba County, Miss. One was the official prom in Fulton, sanctioned and publicized by the school. The other was the unofficial — but real — prom in Evergreen. Background: The Itawamba County School District canceled the regular prom in the face of a legal challenge from the American Civil Liberties Union after Constance McMillen, a lesbian student, had been denied the right to buy tickets for herself and her girlfriend. The announced compromise was this private prom in Fulton, at which all were welcome.
Yet only the lesbian couple and handful of other students, including some with learning disabilities, showed up. The straight kids and mainstream kids were dancing away in formal attire at the shindig in Evergreen. It was reminiscent of a story told by The Birmingham News about what happened in the spring of 1965 to the first African-American girl to integrate Jones Valley High School in that town: "(Carolyn King) spent all Saturday getting ready, fixing her hair, slipping into the pink floral dress her mother finished the week before. … She and her date drove … toward the high school gym. They turned the corner. The gymnasium was dark, empty … White mothers of the prom planners had kept the location of the Jones Valley High prom a secret so she couldn't attend."
Teens sometimes don't know any better. I, for one, was not always as kind as I should have been to schoolmates who were different, and it's a regret that I carry to this day. And occasionally you'll find parents who also don't know any better. Bigots. Fools. Haters. But in Itawamba County in 2010, just like in Birmingham in 1965, virtually an entire community of parents and teens had to conspire to pull off this infamous act of hatred and exclusion'.
Come on folks, Buffy brought a vampire to the prom and nobody batted an eyelid!
Posted by Transpontine at 6:00 am