French for Cartridge are celebrating the release of their new album Liquorice (Dinner with Daisy records) with a week-long residency 'pop-up shop' at Speedies, the retro shop in Shoreditch. 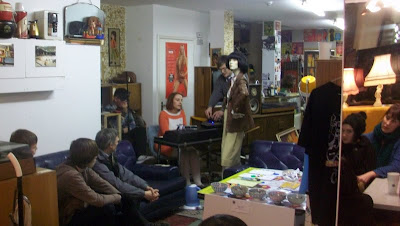 Last night they did a short acoustic set with Catherine Kontz (keyboards, vocals and stylophone) and Henri Vaxby (guitar, vocals and autoharp) accompanied by DJ Walde's human beatbox - the striking black haired figure standing in front of them in the photo is in fact a mannequin. Often described as 'art pop', they certainly have plenty of interesting time signatures and experimental touches as befits a band originally formed by students at Goldsmiths music department in New Cross with a mission to make 'atonal pop' music. But the pop part of the equation is also very much present with otherworldly melodies and strong songs. Henri, incidentally, is also part of Finnish indie popsters Icons of Elegance. 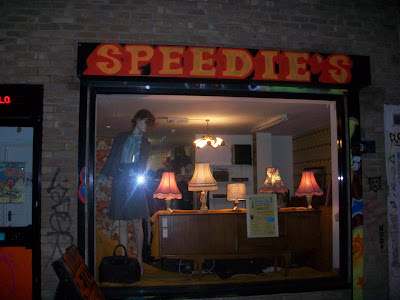 The rest of the week at Speedies (81 Redchurch Street London E2) includes varous sound installations and performances, including of John Cage's Cartridge from which the band took their name (I believe the 'French for' bit was added later to avoid confusion with another similarly monikered band). On Friday 12th February from 7:30 there's the Liquorice album launch party with support from KawaKawa.

Oh in line with the album's name there's also a selection of free liquorice sweets and some nice liquorice tea! 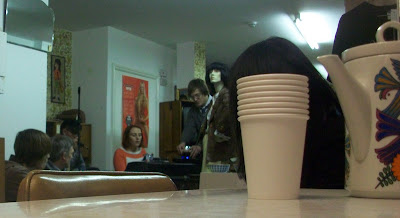 Full details of events over the week at the band's website. From the album, here's 'Oooh!' (film by Riccardo Arena):